Naxxramas: the Fallen Necropolis is an introductory level-90 dungeon, located amidst the fallen Ruins of Naxxramas in Dragonblight. Once the most powerful fortress of the Scourge, it is a crumbling ruin, largely occupied by the Forsaken and besieged by the Alliance. However, the fallen necropolis still holds great danger...

The mighty Naxxramas was the dreaded hammer of the Scourge. A floating fortress capable of crossing even the Great Sea, no land was safe from the shadow of the necropolis. Ruled by Kel'Thuzad, Naxxramas was both a deadly weapon and seemingly impregnable fortress used against the enemies of the Scourge during the last war. But heroes from the Alliance and the Horde turned the tables against the Scourge and invaded Naxxramas directly, fighting their way to the very heart of the necropolis and destroying it's master, Kel'Thuzad.

When the Lich King himself finally fell, Naxxramas lost nearly all of its dark magic, and plummeted from the skies to crash into the Killing Fields of Dragonblight. Its ruins were quickly seized by the Forsaken, who turned away any Alliance forces that tried to secure the fallen necropolis for themselves.

The leader of the Forsaken forces at the Ruins of Naxxramas was Chief Plaguebringer Middleton, one of the Forsaken responsible for the crafting of the Forsaken Blight, although he was cleared of all charges of conspiracy in the rebellion orchestrated by Varimathras. Searching through the crumbling ruins of the necropolis, Middleton discovered the lost phylactery of Kel'Thuzad, a treasure that contain the lich's twisted soul. With the phylactery in his possession, Middleton has fallen under the lich's influence, and now schemes to resurrect his master.

Kel'Thuzad's strength increases every time he returns from the veil of death. Should he rise again, his power will be great enough to threaten all of Northrend, and perhaps all of Azeroth.

The entrance to the dungeon is in the western wall of the Ruins of Naxxramas is Dragonblight. The twisted corridors lead to the original entrance, 4 portals which lead to the four ruined quarters of Naxxramas. After a boss is defeated, a teleporter will activate that will transport players to the next quarter. Once the first four bosses have been defeated, the next teleporter will take players to Frostwyrm Lair. 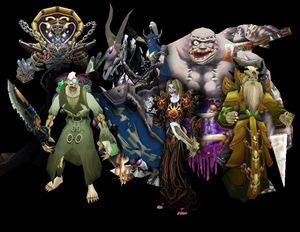 The bosses of Naxxramas, the Fallen Necropolis 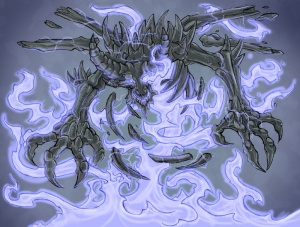 Patchwerk the Undying
This grotesque abomination has been rebuilt again and again. He wanders the crumbling halls of Naxxramas, looking for amusement.

Faerlina, the Risen Widow
Faerlina clung to existence when Naxxramas fell, using dark magic and forbidden alchemy to resurrect herself. Her physical form is wasted and rotting, but her hatred for the living has caused her power to rise to greater heights than ever.

Heigan, the Great Unclean One
Heigan the Unclean was slain in the fall of Naxxramas, and has risen from the grave as a monstrous undead. He awaits all who dare approach his lair in the depths of Naxxramas.

Blaumeux, the Scales of Death
The last surviving member of the Four Horsemen of Naxxramas. Lady Blaumeux is haunted by the phantoms of her fallen partners... or perhaps they are merely the delusions of a mind unhinged by all that it has suffered.

Plaguemaster Middleton, The Shade of Kel'Thuzad
Middleton holds the phylactery of Kel'Thuzad, and intends to use all of his twisted genius to bring about the lich's rebirth.

Sapphiron the Wychlord
A dread Malevolence has imbued itself into the shattered remains of the great wyrm...

Heroic Mode for Naxxramas, the Fallen Necropolis can be activated by players at level 93.