Naz'Amun, the Crawling City, is the center of nerubian power in the Upper Kingdom. Here the nerubian Newbreed rally their forces to assault the surface world, overseen by the terrifying Faceless One, Exitar.

The ancient stronghold of Naz'Amun was the most fortified city located in the Upper Kingdom. Though it fell to the Scourge in recent ages, it has been retaken by the Newbreed, and become their most vital staging ground in their campaign against the surface world.

Naz'Amun itself is composed of a large central cluster of buildings with eight towers encircling it, each tower joined to the central city by ornate bridges. From above, the entire complex resembles an immense spider, hence it's name the Crawling City. The city is built over a ravine that stretches down into utter darkness, a pit that is crossed and recrossed with nerubian bridges and spider webs. Some areas on the Crawling City are still infested with mindless undead, who ravage and kill without direction from the Lich King.

Naz'Amun lies at the heart of the Upper Kingdom. The central court of the city is swarming with nerubian Newbreed forces supported by Twilight Scourge cultists. Attempting to storm the gates would be certain death. To enter the city proper, players can take advantage of some of the lingering damage done to the city by Scourge forces - one of the towers on the western side is exposed to stealthy intruders. 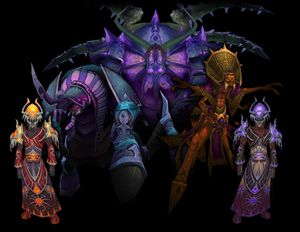 The bosses of the Crawling City. 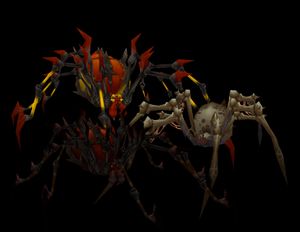 The Trial of Eight Legs is a Heroic Mode only challenge.

Spiderlord Regah'nekhan
One of the high ranking warriors of the Newbreed, this colossal arachnid horror is poised to lead the nerubians on their conquest of the surface world.

Mage-Lords Kelmane and Reigor
Powerful mages from the ranks of the Arach'layn. They have been sent by their hidden masters to aid the nerubians. Alone, each one is a mystical force to be reckoned with. Together, they are all but invincible.

Spidermind Kir'nalax
A fearsome nerubian beast, bloated with the dark power that fuels the Newbreed. His mental powers can entrap the strongest minds in never-ending nightmares.

Exitar, Baron of the Black
One of the terrifying leaders of the Faceless Ones, Exitar has risen from the darkest depths of Azeroth's Underworld to lead the armies of the Old Gods.

The Trial of Eight Legs
A deadly gauntlet offered by the Crawling City to those who seek the greatest challenges. Heroic Mode Only.

Heroic Mode for Naz'Amun, the Crawling City can be activated by players at level 93 after they've completed normal mode.