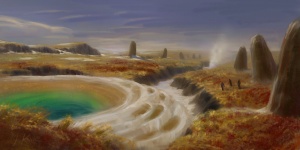 Life returns to Northrend in the wake of the Lich King's demise.

The Borean Tundra is located in the far western edge of Northrend. Coldarra is an island just off the coast.

With the death of the Lich King, most of the Horde and Alliance forces in the zone have returned to their respective capitals, leaving behind token forces to protect their holdings. While the majority of Scourge forces have vanished from the tundra, the kvaldir have increased their presence in the region, and the naga have returned in force, supported by agents of the Twilight Hammer. Several factions of Scourge remnants still cling to their holdings, seeking a way to bolster their forces.

The Cataclysm has wrought several important changes in the region. The shore side Tuskarr capital of Kaskala was washed away, forcing the Tuskarr to evacuate, although several of them remain to attempt salvage operations. The ley lines of Coldara that were realigned by Malygos during the Nexus War were further damaged by the Cataclysm, and the Kirin Tor have joined forces with the newly peaceful blue dragonflight to halt the damage. The devastation of the Cataclysm and the chaos wrought by the ley line realignment have resulted in heavy damage to the blue dragon fortress of Nexus, forcing many of the blue dragons to withdraw.

The Horde established the settlement of Warsong Hold under the command of the son of Grom, Garrosh Hellscream. The Horde created a pact with the local and culturally similar tuskarr, who are under siege from the Kvaldir, a clan of Vrykul. Garrosh and his forces also discovered the enigmatic taunka, an ancient offshoot of the tauren race thought to be lost forever.

The Borean Tundra has been twice afflicted with catastrophe. Not only did Deathwing's cataclysm affect the region, but in the wake of the Nexus War, the ley lines that were realigned my Malygos have begun to further destabilize. Without an Aspect of Magic, repairing the damage has been slow and dangerous.

The Borean Tundra is wide, flat, and cold. The landscape varies greatly. Hard but farmable soil in the south lead to nourishing steam pools in the middle. Along the west edge, nasty cliffs rise up and then shear off into the Westrift. The north is home to grasslands and an area of steep hills. The east is snow-covered and the most brutal this area has to offer.

At its northeast edge the tundra runs into the mountain range of Wintergrasp, a vast frozen region that effectively shields it from the Dragonblight and Icecrown. The only way to reach these areas overland is across the mountains bordering the Dragonblight or through the Sholazar Basin, neither which are easy. An army would be suicidal to attempt either. Not many plants can survive up here. Without any cover the wind is fierce enough to tear flesh, and people can barely hear themselves when they shout. A few trees manage to hang on, evergreens, but the small twisted kind rather than the tall proud ones out east. Wolves and rabbits and foxes and even bears, roam this area. However, most of the life is in the water. The zone is separated from the Dragonblight by an unnamed river.

To the northwest, one can see the high plateau of Coldarra. It is high enough to be blanketed in snow year round. Lately, rumblings have shaken the earth around the lone island. Geologists are concerned with the appearance of rifts in the crust and worry that a massive earthquake could tear Coldarra apart. This would have massive repercussions on the stability of Borean Tundra and possibly Northrend itself. 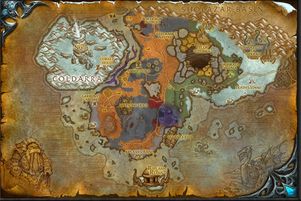 The Scourge's defeat has ended their assault on the Horde and Alliance strongholds in this region. Instead, Warsong Hold is now under heavy assault from kvaldir raiders, while Valiance Keep has come under attack from naga supported by Twilight's Hammer elementals. The Plains of Nasam near Warsong Hold have become a blighted swamp, the Nasam Mire, after the Scourge plague-spreaders crashed into it. Goblins will send troops in via a hovercraft vehicle to rescue Horde forces and combat the vargul necromancer who is trying to raise the Scourge remnants from the mire and attack Warsong Hold.

The Nexus War has ended and the blue dragonflight have reconciled with the Kirion Tor in the area. The death of Malygos caused the blue dragons to lose control over their efforts to realign Azeroth's ley lines, and in the wake of the Cataclysm, circumstances have grown worse. Without the power of the Aspect of Magic, the ley lines growing increasingly unstable in their realignment, resutling in the Nexus becoming heavily damaged, and causing the Oculus rings to collapse, and closing off the Oculus dungeon and Eye of Eternity raid. Quests from Amber Ledge will involve repairing the magical damage in the region.

In Coldarra, the blue dragonflight and the Kirin Tor have constructed the fort of Cobalt Hold as a staging ground. The battle-mage Madra is the commanding officer at Cobalt Hold, directing the efforts of both dragons and magi, as well as any agents of the Alliance or the Horde that have come to lend their aid. Coldarra and the Nexus have become overrun with rampaging mana elementals and insane blue dragons. Blue dragons slain by the collapse of the Nexus are coming back to life as wychwyrms, undead dragons saturated with dangerous amounts of arcane energy. One wyrm in particular, the former Ley-Guardian Eregos, launches repeated attacks against Cobalt Hold. All of these threats appear to be under the influence of an evil force somehow connected with Azeroth's ley lines, which Eregos refers to as The Malevolence. After pushing forwards into Coldarra, agents of the Twilight's Hammer can be found experimenting with the arcane energy in the region, seeking to uncover what is causing the creation of wychwyrms. Twilight Arcanist Zin'fanel is the leader of the Hammer's agents in the region.

Scourge remnants still occupy Necropolis Naxxanar, but the Temple City of En'Kilah has partially collapsed underground due to the Cataclysm. Nerubians and Undying Tendrils have infested the ruins and are currently engaged in combat with the remaining Scourge. Quest phasing will involve fighting off both factions before sending Naxxanar crashing down.

Other quests in the region involve dealing with the massive sinkhole that has opened in the geyser fields, releasing nerubians onto the surface, and aiding the tuskarr in their salvage operations after Kaskala was sunk by the Cataclysm. The ruins are infested with naga, and they've brought a few Faceless Ones with them.

The Cataclysm caused the Riplash Ruins to be thrust high above the surface of the ocean, exposing more of the mysterious structure. Deep beneath the night elf portion of the ruins, nerubian architecture can be found. The naga are currently fighting the kvaldir to retake this area. Level 70-80 questing involves the lower portions of the ruins, while the upper portions contain an entrance to the high-level Riplash Ruins dungeon. Once players have reached the appropriate level, a starter quest can be found in any capital city that will teleport them first to Valiance Keep or Warsong Hold, and then fly them over to the dungeon entrance for easy access. 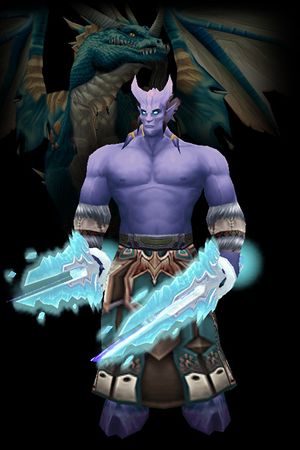 Madra of the blue dragonflight.

Changes to Instances in Borean Tundra