The Dragonblight, also called the Great Dragonblight, is a great dragon graveyard, located in Northrend. The vile Scourge plundered this sacred burial site for dragon bones to raise as undead frost wyrms until the defeat of Arthas finally drove the undead from the lands.

At the heart of Dragonblight is Wyrmrest Temple, where representatives of all of Azeroth's dragonflights meet to discuss matters of importance. With Deathwing's cataclysmic return to Azeroth, the black dragonflight has withdrawn from the Wyrmrest Accord and has begun laying siege to Wyrmrest Temple. The blue dragonflight recently reconciled their differences with the rest of the dragonflights, and have joined efforts in defending the temple.

In western Dragonblight lies the Pit of Narjun, the entry point into the lower reaches of the Spider Kingdom.

The forces of the Scourge defiled the great Dragonblight to raise the dragon remains as undead drakes in the service of the Lich King, while the Nexus War against the blue dragonflight occupied the resources of the Wyrmrest Accord. With the death of Arthas, the Scourge have pulled out of Dragonblight, and the Wyrmrest Accord has begun to focus it's efforts on dealing with the treacherous black dragonflight.

When the corrupted black aspect Deathwing erupted back into the world, the forces he unleashed shattered all of Azeroth. Northrend has not escaped the devastation, and even the sacred Dragonblight has been touched. Wyrmrest Temple became the site of a ferocious conflict between the forces of the Old Gods and the Dragonflights. The forces unleashed by this conflict still scar the land...

Most of the Dragonblight is a single valley, sloping southward to the Shiverwind Coast. Low hills rise along the sides, taller to the east where they butt up against the Grizzly Hills and Zul'Drak. To the north a thin line of tall, sharp-edged cliffs breaks the land where Icecrown Glacier begins. The western edge borders Lake Wintergrasp, and the ground there is low and even and frozen solid. 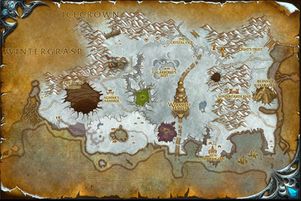 Scourge remnants remain all throughout Dragonblight, although most have been reduced to mindless undead. San'layn under the command of Prince Atherann and Prince Theraldis are attempting to raise the dead of Indu'le Village. In New Hearthglen, the surviving Scarlet Onslaught have succumbed to madness and joined the Cult of the Damned, under the command of the Necromancer Heigan the Unclean and the Death Knight Lady Blaumeux, who escaped from Naxxramas before it's final destruction. The Ashen Verdict has established a camp outside Angra'thar, the Wrath Gate, which has been opened. Questlines will take adventurers into unexplored parts of Icecrown Citadel, and will involve interaction with the new Lich King and the Scourge remnants that remain inside.

The ruins of Naxxramas have become a Horde camp occupied by the Forsaken. With the death of both Kel'thuzad and the Lich King, the necropolis lost all power and crashed into the Killing Fields. The Forsaken have Kel'thuzad's phylactery in their possession, and have begun conducting experiments in order to uncover the secret of creating a lich. Alliance forces from nearby Wintergarde Keep are attempting to force them out.

The Twilight's Hammer are conducting further experiments with damaged ley lines at the Glittering Strand, Lothalor Woodlands, and in the drained lake at Indu'le Village. A worrying development is that the Twilight's Hammer seems to be interacting peacefully with the Scourge remnants there. The alliance camp of Star's Rest has been expanded into an elven fort, Lotharlar Lodge, in response to the increased threat. The Twilight's Hammer has also joined the San'layn faction of Scourge Remnants in excavating dragon bones, and is experimenting with creating new forms of undead drakes imbued with the power of twilight dragons. Twilight Lord Xarosan is the commander of the Hammer's forces in the region.

The most significant change to Dragonblight is the expansion of the Pit of Narjun, which has swallowed much of the surrounding terrain. The tunnels that lead to the Wrath instances of Azjol-Nerub and Ahn'Kahet remain, but the pit leads much deeper down into the new zones of the Spider Kingdom.

Changes to Instances in Dragonblight