The Storm Peaks are a zone located in the northeast of Northrend. It is where a mysterious race of giants named the storm giants live. The titan city of Ulduar is also located here. The winds that rip through the mountains are extremely violent and dangerous.

The Storm Peaks have a mysterious history. Long ago, the Titans lived here. They created Ulduar as their city, and it is from here that they conducted their experiments. It is said that the Storm Peaks are the origin of the storm giants, and perhaps the dwarves and troggs as well. The tol'vir aided the Titans in the construction of the great city, but all members of the cat-like race vanished long ago.

The region was protected for centuries by the earthen, giants, and the Titanic Watchers left behind by the Titans. The supreme ruler of the Storm Peaks and the primary guardian of all of Azeroth, Loken, co-ordinated the efforts of the Titans' creations for centuries. In time, Loken fell to the corruption of the Old God buried beneath Ulduar, the vile Yogg-Saron. Loken captured the other watchers and schemed to release Yogg-Saron. He nearly succeeded, but heroes of the Alliance and the Horde infiltrated Ulduar and put an end to both Loken and his dark patron.

After the defeat of Yogg-Saron and his servants, the Iron Dwarves and the corrupted watcher Loken, the former earthen and giant residents of Ulduar were able to retake their home. In the wake of the Cataclysm, dark forces from beneath the surface have risen to assault the bastion of the Titans.

The substructures of Ulduar are built throughout the Storm Peaks, and they weathered the devastation wrought by the Cataclysm surprisingly well. Some of the great machines left buried by the Titans and their servants have ceased to function, but the earthen tirelessly labor to restore them to working order. Nerubians have begun to infest the lower substructures, digging tunnels into the ancient machinery. 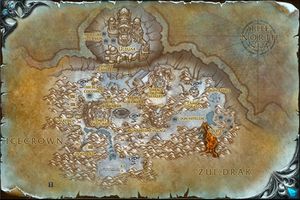 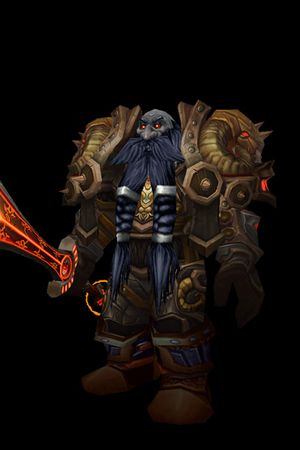 Forgemaster Balehammer leads the forces of Twilight in Storm Peaks. He desires the secret of creating Iron Dwarves.

Death Queen Angerboda and her faction of Scourge remnants have traveled to the Storm Peaks in order to bolster their forces for their march upon Icecrown. Angerboda has occupied the vrykul village of Valkyrion, where she is using the pools of blight there to raise slain protodragons as undead steeds for her warriors. She has already created a host of these skeletal monsters and is using them to attack the dwarven fortress of Frosthold. In response to Angerboda's presence in the Storm Peaks, Vidar Ymironson has traveled there as well and is meeting with the hyldnir at Brunnhildar village. Vidar will require aid in securing the alliance of the fiercely independent hyldnir. 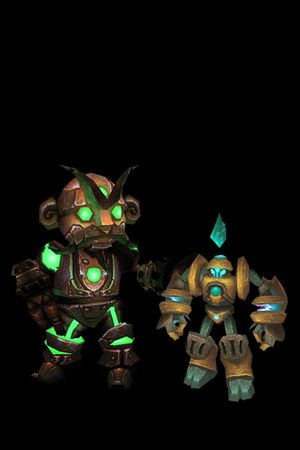 The leader of the Twilight's Hammer in Northrend is the dark iron dwarf Forgemaster Balehammer, who is overseeing the taking of the former holdings of the Iron Dwarves. When Yogg-Saron was defeated, all of the Iron Dwarves went into stasis, leaving their cities unguarded and their technology free for the taking. The Twilight Hammer have begun experiments with re-awakening the Iron Dwarves. After extracting liquid saronite from the remains of Iron Colossus, Balehammer discovers that it can be used to reanimate the Iron Dwarves, as well as greatly increasing their power. Balehammer is finally confronted at the Temple of Wisdom, formerly the seat of the corrupted Watcher, Loken, where he is given the secret of creating Iron Dwarves by a vrykul woman called Sara. Balehammer escapes with the information before he can be slain, while Sara mocks the player and vanishes.

Watcher Mimiron is in charge of repairing the systems of Ulduar that were damaged in the Cataclysm. Nerubians have infiltrated the inner chambers of Ulduar through underground tunnels, and Mimrion requires aid in clearing them out. Mimiron will provide players with access to his new inventions and back-up in the form of his mechagnome and clockwork giant minions.

After liberating the four Watcher sanctums in Ulduar, Mimiron and players will confront Balehammer once again, in the Prison of Yogg-Saron. Balehammer and his forces are again joined by the vrykul Sara. The prison is infested with Undying Tendrils and faceless ones, as well as members of the Twilight's Hammer. The corpse of Yogg-Saron remains where the Old God had fallen, and has degraded into a massive lump of rotting, semi-liquid saronite. Balehammer extracts a dark crystal of pure saronite before retreating, leaving players and Mimiron to confront a Faceless General named Malefax summoned by Sara. Mimiron will call upon XT-002-&-1/2 to fight against Malefax by transforming into a clockwork giant.

The Frost Giants at Dun Niffelem have a new series of daily quests revolving around defending their home from marauding Deathflight frost wyrms.

The Twilight's Hammer have begun conducting rituals to take control of the revenants of the Storm Peaks. Several enslaved revenant forces are already assaulting Camp Tunka'lo.

Changes to Instances in Storm Peaks