Zul'Drak is an area located in eastern Northrend. For generations, the Drakkari ice trolls ruled a sprawling empire that filled the region with temples and cities. The wrath of the Lich King brought about the end of the troll's reign in a few short years. The Scourge invasion decimated the Drakkari, driving the survivors into a desperate gambit. Drakkari mystics began sacrificing their Loa animal gods, hoping to take the spirit beings' power for themselves and use it against the Scourge. Their dark plot failed, as the Drakkari were betrayed from within and overwhelmed from without, and all of their great champions who were imbued with the essence of the Loas were slain.

With the death of the Lich King, the Scourge forces in this region have been reduced to mindless undead. The great floating necropoli and plague-spreaders that the Scourge brought to wage war have fallen into ruin, releasing an unholy blight across the lower tiers of Zul'Drak. Undead are running wild, fueled by the plague, attacking anything that lives.

The Ashen Verdict maintains a presence in Zul'Drak, but their forces have begun to fracture under the weight of the danger in the region. 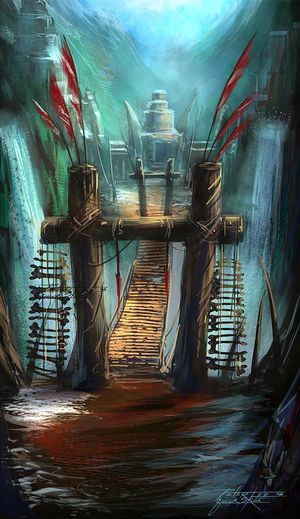 The Drakkari empire has devoted itself to chaos.

The Drakkari were one of the few civilizations in Northrend capable of withstanding the onslaught of the undead Scourge. The Scourge forces were only able to advance into Zul'Drak through subterfuge, recruiting the renegade ice troll Drakuru and using him as an agent against the magical defenses of Zul'Drak. After Drakuru unwound the protective enchantments of Drak'Tharon Keep, he was transformed into a death knight by the Lich King himself, and granted leadership over a vast army of the undead, which he led into Zul'Drak. Though Drakuru eventually fell from the Lich King's favor, the Scourge forces he brought into Zul'Drak have wrought terrible carnage, spreading the undead plague and blighting the landscape to the point where it may never recover.

To halt the onslaught of the Scourge, the Drakkari turned on and slew their animal gods, the Loa. Using the essence of the slain gods to empower their champions, the Drakkari hoped to create a force that could destroy the Scourge. In the end, all their power was only able to slow the advance of the undead, and eventually forces of the Alliance and the Horde were drawn into the conflict. The Drakkari were opposed by their fellow trolls and distant relatives, the Zandalari, who arrived in Zul'Drak to stop the ice trolls insane schemes. Eventually, with all of the empowered Drakkari were slain, and the majority of their forces withdrew to the upper regions of Zul'Drak and their primary fortress, Gundrak.

The Drakkari saw the devastation of the Cataclysm as a judgment upon them for their sins against their animal gods. As the ground cracked apart and the sky rained fire, the trolls cried out to any force that might deliver them from the nightmare their lives had become. Their call was answered by the Twilight's Hammer. Agents of the vile cult arrived in Zul'Drak to find the Drakkari spiritually vulnerable, and moved quickly to introduce the ice trolls to the worship of the Old Gods. Eager to find a new focus of worship, the Drakkari rapidly converted their faith to honoring the Old Gods and calling upon their power. The Twilight's Hammer have taken advantage of both the Drakkari's fervent devotion and the tremendous natural energies that saturate Zul'Drak in the wake of their gods deaths.

Zul'Drak is the Drakkari homeland. Their culture is believed to have existed long before the Great Sundering. Though their empire stood strong for thousands of years, the onslaught of the Scourge has reduced it to a shadow of its former self. As the hordes of undead swarmed through the ruins of Zul'Drak, the Drakkari turned on their own gods, the Loa. By destroying these ancient and powerful begins, the Drakkari hoped to acquire their power and use it against the Scourge.

In the wake of their gods death, the Drakkari were at a loss. Their gambit had held off the Scourge for a time, and the death of the Lich King had spared their empire, but without the focus of their worship, the Drakkari spirit seemed to have been crushed. When the Twilight's Hammer arrived in Northrend, they saw an opportunity to bring the Drakkari under their sway, replacing the Loas with worship of the Old Gods.

The lower tier of Zul'Drak has become a mire of death and decay, with the Scourge's blight spreading throughout the woodlands and poisoning everything it touches. The middle tier remains largely secure by the Argent Dawn and the Knights of the Ebon Blade, who are holding back the encroaching taint from the lower tier. In the upper tier, the once snow-covered plains have been twisted, transformed by the Twilight's Hammer and the eldritch corruption of their summonings. Elementium spires erupt from the earth, twining around and through the ruins of the Drakkari. 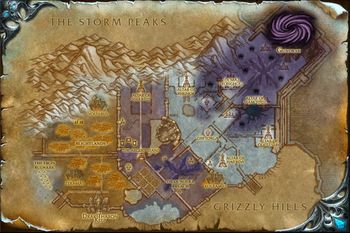 The crashed Scourge necropoli in the region have caused the blight to engulf the entire lower tier, turning it into the deadly Blightlands. Towering plague mushrooms have overtaken the forests, blotting out the sky and showering the earth with spores. Drakuru's Blightblood trolls are running rampant through the lower tier, spreading the plague further. Undead trolls have instinctively flocked to the side of these mighty creatures, making it extremely difficult to destroy them. The Knights of the Ebon Blade have a heavy presence in this region, being largely immune to the blight, and have many quests related to destroying the undead. The San'layn have a small presence in the ruins of the Necropoli, desperately trying to salvage what they can from the wreckage. Players will learn that their faction has been almost completely destroyed by Angerboda's forces, and the few San'layn that remain are being forced into subservience to Amal'thazad and his death cult.

The Argent Crusade has remained entrenched in the Argent Stand, fighting against marauding undead from the lower tier and the Drakkari of the upper tier. Several Zandalari trolls from Zim'Torga have joined the Argent Crusade, soliciting their help against the increased Drakkari hostility in the upper tier. The Crusaders will require aid both in securing their position, dealing with the local threats, and their efforts to cleanse the encroaching blight from the lower tier. Many Drakkari refugees have come to the Argent Stand as well seeking aid, driven nearly mad by their ordeals. Some of them babble that the slain Loa gods are returning for revenge.

Drakkari have retaken the ruins surrounding the Altar of Sseratus, and quests in the area involve fighting a path to the altar itself to witness ice troll druids conducting a ritual. The druids call upon the power of the Emerald Dream to restore the fallen god, but it becomes clear that they are tampering with evil forces, and Zandalari accompanying the player will sense the power of the Nightmare. The corpse of Sseratus is imbued with evil energy and returns as a dark, corrupted version of his former self - Madcoil. The Drakkari are driven into an insane frenzy by the return of their gods, forcing the Argent Crusade troops in the region to fall back to the Argent Stand. Further quests will direct the players to seek out the Zandalari at Zim'Torga for answers.

At Zim'Torga, Drakkari forces are joined by captive elementals and ice trolls who have gained twisted, druid-like powers of shape-shifting. The Zandalari are unable to hold out against the onslaught, and things go from bad to worse when the Drakkari unleash Madcoil upon the grove. The quest chain in the region culminates with Har'koa attacking Madcoil and slaying him. However, the forces of the Twilight Hammer suddenly arrive, with Faceless Ones in tow, led by Twilight Lord Urizen, one of the Hammer's most powerful agents in Northrend. Har'koa is slain and revived by Urizen as Nightfell, another evil Loa like Madcoil.

The Zandalari are forced to abadon Zim'Torga, and briefly fall back to the Argent Stand. From there, players will aid the Zandalari and the Crusaders in retaking the upper tier. First, Nightfell must be slain at the Altar of Har'koa. Players will also confront Gotarr, an evil version of Rhunok, and Gromul'Junn, the twisted mammoth god that was once Mam'toth. At the Altar of Quetz'lun, players discover that the wind serpent loa has gone completely insane, and the dark netherworld she has created threatens to spill over into the material plane. The Twilight's Hammer are feeding Quetz'lun's evil and insanity by sending in Drakkari troops to battle her and her undead minions, exploiting the carnage to fuel their dark rituals and summon more Faceless Ones to Zul'Drak.

The steps to Gundrak are guarded by Icheron, the rhino god Akali's twisted double. The great temple at Gundrak itself has been dismantled by the Twilight's Hammer and rebuilt into a massive twilight portal. There, Urizen is conducting a ritual using the stolen energies of the Loas to summon forth a gigantic Facless One known as Zildrohar the Traveler. The final battle of Zul'Drak culminates with the Zandalari and the Argent Crusade launching an aerial assault upon the half-summoned Zildrohar. Players will ride an Argent Hippogryph into battle and use it and their Crusader and troll allies to banish Zildrohar back to the void he is trapped in.

Zildrohar's banishment causes many of the Twilight's Hammer forces, including Urizen, to be drawn into oblivion along with the giant Faceless One. In the aftermath, the Zandalari vow to continue their efforts to redeem their Drakkari relatives, and offer daily quests for players to continue the battle against the remaining Twilight's Hammer forces. 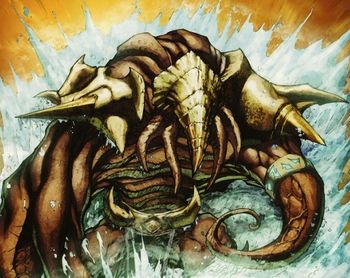 Changes to Instances in Zul'Drak