The Demon's Tomb is the third patch for the Reign of Azshara Expansion Concept. 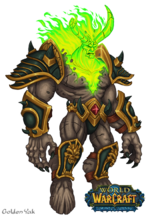 The Avatar of Sargeras

The Alliance and the Horde have triumphed against the greatest threats that Zin-Azshari has to offer. The stygians are no more, the raging spirits of Zandalar have been quieted, and the Legion Ex Machina has been dismantled.

However, magic-users throughout Zin-Azshari have recently detected disturbances emanating from the Tomb of Sargeras in the Broken Isles. Some dark power there is on the rise...

Something sinister is on the rise in the Tomb of Sargeras. Perhaps stirred to waking by recent trespasses, the dark power within the tomb is beginning to awaken, driving the undead inhabitants of the Broken Isles into even greater rampages, and drawing in demons from the Twisting Nether. New regions have been made available around the Tomb for exploration and questing, and special events and quests culminate in the appearance of a new World Boss - the Shattered Avatar of Sargeras.

The Echo of Gul'dan Storyline Event

The echo of Gul'dan, a bodiless wraith created from the dead warlock's last memories and the ambient demonic energy of the Tomb, attempt to seize the last of Sargeras' faded power for itself. However, the Echo was instead consumed by the demon lord's lingering rage, devoured by the very power it sought. Now, the power of Sargeras' hatred has erupted from the tomb, blasting apart the surrounding structure and exposing the Terrace of Oblivion, where the ruined and broken Avatar of Sargeras holds court over an army of demons. The flame of Gul'dan's evil has reignited the avatar, which now seeks to regain all of its former power. If it succeeds, then the true Sargeras will be able to re-take it and at last walk upon the earth of Azeroth.

The Shattered Avatar of Sargeras is a boss on par with the mightiest challenges of the Kajaro Undervault.

Call of the Old Gods

Throughout the seas around Zin-Azshari, naga activity is on the rise. Naga forces supported by the malevolent faceless ones have been reported attacking ships. The naga seem to be converging towards a location to the north of Zin-Azshari - it could be that whatever Azshara was seeking when she raised the sunken lands has finally been located.

A host of new creatures can be found.