User:GoldenYak/Patch X.3 - The King of Darkness

Patch X.3 - The King of Darkness 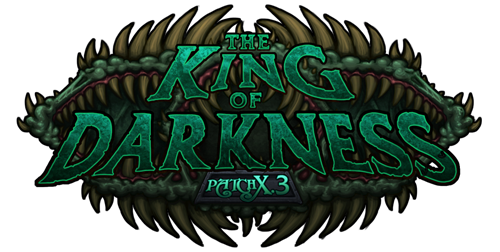 The King of Darkness Storylines

The final chapter will now unfold...

The King of Darkness is Crowned

The aqir are plotting to return to the world, and they intend to bring their goddess, the Unspoken, with them. To shatter the final barrier that lies between them and supremacy, they have wrought an unspeakable horror on the world - the King of Darkness. This unholy creation is the ultimate champion of chaos - the lynchpin of the aqir's millennia-spanning scheme.

The King of Darkness has risen, and he is Death. He will open the way for the aqir to return. He will cause silence to fall. Then the six mouths of the Unspoken will sing the songs that end the world. And all shall be extinguished.

The Observer is Called

With the ultimate plans of the Twilight cult and the Spider Kingdom revealed, the keepers of Ulduar have contacted Algalon, their mightiest brother, for assistance. Within Ulduar, the Watchers unlock a Titan waygate that allows passage to the moon, where Algalon resides in his sanctum. The Lunar Vale zone is now available for players to explore.

March of the Titans

Soridormi has become corrupted by the undying essence of the Old God C'Thun, transforming her into the first infinite dragon. She has traveled back to the very dawn of time, the era when the titans battled the Old Gods for supremacy over Azeroth. Soridormi is attempting to change the outcome of the great battle, something which would have ramifications not only for all of Azeroth's history, but possibly the entire universe as well...

A host of new creatures can be encountered.

New level 95 dungeon and raid zones have been unlocked. Players must advance to level 95 before they are able to enter these zones.