The furbolg of Northrend were lured into the depths of the underworld and fell under the dark influence of Yogg-Saron. Living within the roots of the corrupted world tree, Vordrassil, they have transformed into monstrous creatures barely recognizable as the beings they once were. Liquid saronite has infested their bodies, granting them twisted metallic hide, fangs, and claws. In the depths of the Shadow Web Caverns, these furbolg have crafted a stronghold known as Terrormaw Hold.

Deep within the curling, crudely carved tunnels of their underground fortress, the corrupted furbolg have gathered together in great numbers to undertake a dark and terrible ritual. They seek to resurrect the bear god Ursol, as the furbolg of the Grizzly Hills did to the bear god's twin brother, Ursoc. This time, however, the furbolg are knowingly attempting to revive the Ancient as an evil, twisted version of himself, a dark reflection of his former glory. This abomination will then lead the corrupted furbolg to the surface, making war upon all those who dwell in the light.

Terrormaw Hold is located in the eastern region of the Shadow Web Caverns. It is situated directly below the failed world tree Vordrassil. 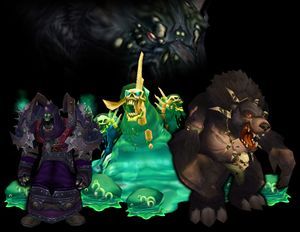 The bosses of Terrormaw Hold. 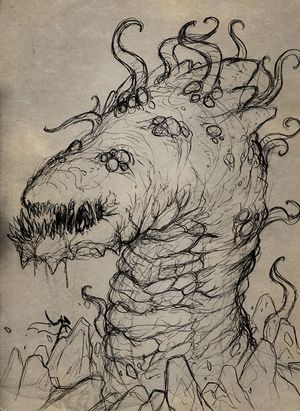 Twilight Caller Vangron
An elementalist of the Twilight Scourge - a dark shaman who bends the elements to his will.

Szklurk the Slimelord
An enormous slime, this revolting creature is the result of centuries of fermenting liquid saronite mixed with the rotting remains of countless sacrificial victims.

Ursol the Mad
The bear ancient, brother to Ursoc. Like his brother, he was revived as an abomination by the power of the corrupted world tree. 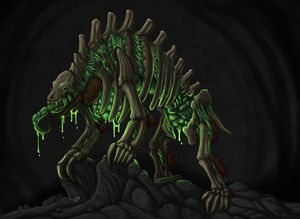 Yogg-Nur, the Howling Maw (Heroic mode only)
One of the Thousand Maws of Yogg-Saron.

Heroic Mode for Terrormaw Hold can be activated by players at level 93 after they've completed normal mode.