Related to the Into The Void Expansion Concept. This new leveling system comes into play as characters progress through the expansion's content. 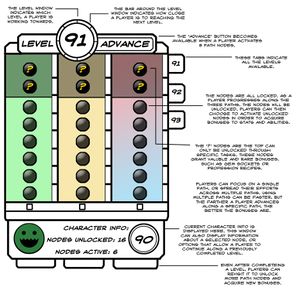 The Path of War

The Path of War is a new character progression system available at max level. It complements the standard method of leveling by acquiring experience points for levels 1 through to max.

Rather than simply acquiring a large number of experience points by slaying monsters or completing quests, players can spend each level progressing along three paths based on their playstyle. These paths can be viewed by opening the Path of War window. The three paths are:

Each of the three Paths has a seperate bar that is filled for accomplishing different tasks. Players are free to focus on a single path or multiple paths simultaneously.

Paths for each level are available for players to unlock over the course of gameplay.

Unlocking the Path of War

Each of the three paths contains multiple Path Nodes, which are unlocked as players progress along the path. Unlocking and activating a Path Node will grant the player various bonuses to their statistics and abilities.

Players can acquire experience with the Lore Seeker path by doing the following:

Players can acquire experience with the Dungeon Master path by doing the following:

Players can acquire experience with the Warmonger path by doing the following: 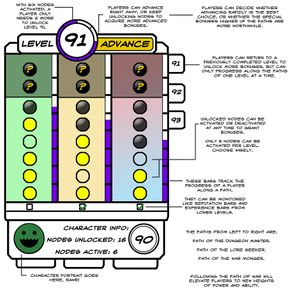 Advancing along the Path

For every Path level, the three paths contain 8 Path Nodes each, for a total of 24 possible available nodes. 8 nodes can be activated per level - once 8 nodes are active, players are able to advance to the next Path level. Once the next Path level is unlocked, players can begin unlocking Path Nodes for that level and acquire new bonuses.

Once a player has moved to the next Path level, the previous Path level becomes a tab on the Path of War screen that can be viewed at any time. Players can clear the Path Nodes of their previous level Path of War screens for a small fee, allowing them to activate different nodes to obtain different bonuses. Clearing the screen will not affect a player's current Path level in any way, and a screen cannot be cleared unless a player has advanced to the next highest level.

End of the Path

The top 2 nodes of each path are Task Nodes and are sealed. Even if a player has progressed far enough along a path to reach them, they cannot be activated until the seals are broken. These nodes provide different bonuses from nodes lower down the path. Rather than giving bonuses to statistics, Task Nodes may grant bonuses such as new gem sockets, arcanum enchant slots, unlocking extra profession recipes, and more.

Breaking the seals will involve accomplishing specific tasks. Some level tasks could be the following:

Rewards of the Path

The various nodes of the three paths provide bonuses to your character, allowing players greater freedom to customize. The following are some examples of rewards.

Some nodes lower down the paths may grant the following bonuses:

The Task Nodes at the higher points of the path grant more exotic rewards: