At the moment of the Lich King's death, his mental dominion over the whole of the undead Scourge was broken. While most of the lesser undead were reduced to mindless monsters, some of the more powerful members of the Scourge who had retained intelligent minds suddenly found themselves with free will as well. Though a new Lich King was crowned moments after the fall of Arthas, many of the freed, sentient Scourge entities resisted the call of the new Lich King, and broke away from the Scourge to forge their own destinies.

The San'layn and the Sin Scourge 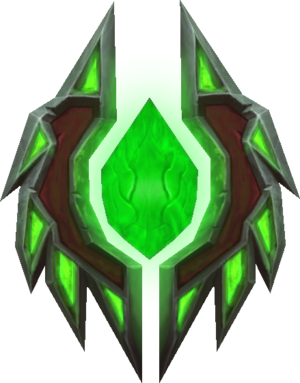 The surviving darkfallen of the San'layn, under the command of Prince Atherann and Prince Theraldis, were quick to seize power for themselves after the fall of the Lich King. Using dire threats and promises of immortality, the princes seduced many members of the Cult of the Damned into serving them. The San'layn fled Icecrown and consolidated their forces in the Temple-City of En'kilah, where they and their cultist necromancers plotted to raise a new undead army and take advantage of the reduced Horde and Alliance presence in the Borean Tundra to seize more territory.

Before the San'layn could organize their new army for an attack, the Cataclysm tore through Northrend, causing portions of En'kilah to collapse into the underworld. The forces of the San'layn came under assault by armies of living nerubians rising from the Spider Kingdom. Most of the San'layn ground forces were quickly destroyed, forcing the darkfallen to reatreat into their floating necropolis.

Desperate to bolster their forces, Atherann and Theraldis schemed to bring the scattered armies of the vrykul still loyal to the Scourge under their control. Retrieveing the corpse of queen Angerboda from Gjalebron, the San'layn conducted a necromantic ritual, resurrecting her into undeath. The San'layn planned to use the undead Angerboda as a puppet to manipulate the vrykul, but Angerboda refused to controlled, and turn on the princes, slaying many of them and forcing Atherann and Theraldis to flee. Angerboda proceeded to unite the scattered vrykul forces into a new army under her control.

With their forces depleted and their plans in ruins, the San'layn have withdrawn completely into their remaining necropolis, Naxxanar. Angerboda has not forgotten what the San'layn tried to do to her and her people, and seeks revenge upon them. Surrounded by enemies, the San'layn have begun subtle efforts to take control of Horde and Alliance forces in Northrend, using their vampiric abilities to manipulate living victims as puppets. They have also reluctantly begun to reach out to other factions of the Scourge Remnants as allies.

In addition to the remaining darkfallen in Northrend, the San'layn has also secured the alliegeance of numerous members of the Cult of the Damned. Several death knights and their warbands have agreed to fight for the San'layn. The armies of living nerubians attacking the Temple-City of En'kilah have also provided the San'layn with numerous nerubian corpses, which they have raised as Crypt Fiends.

Angerboda and the Queen's Wrath Scourge 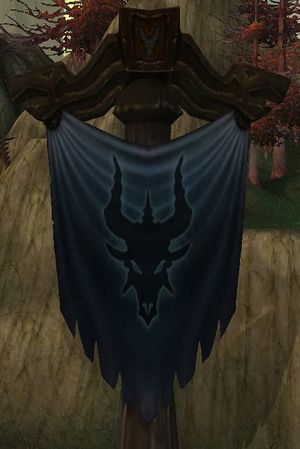 After her death in Gjalerbron, the corpse of Angerboda was retrieved by darkfallen of the San'layn and resurrected into undeath. The darkfallen intended to use Angerboda to manipulate the vrykul race, but the vrykul queen refused to become a pawn to the San'layn, and she turned against them. After learning of the fate of the former Lich King and the ascension of a new king devoted to keeping the Scourge contained, Angerboda swore to forge her own army of the undead, and lead her people into immortality personally.

Rallying the remaining vrykul that served the Scourge in Icecrown, Angerboda led them back to the Howling Fjord, planning to continue excavating the numerous vrykul still slumbering in hibernation in vaults throughout the region. Angerboda enslaved numerous members of the Cult of the Damned as a workface, enforcing their obidience through threats and torture. Her army grows daily as more and more vrykul awaken, while the burial grounds and ancestral crypts of the Howling Fjord provide further undead troops.

Angerboda is opposed in her efforts by her own son, Vidar Ymironson, who has rejected the path of immortality through undeath. Vidar seeks to return his people to the old ways of honoring the titans, and winning immortality through legendary acts. She has also become the enemy of both the Alliance and the Horde forces remaining in Northrend, and the other factions of the Scourge Remnants, all of whom she has vowed to crush as inferior.

Angerboda leads the majority of the vrykul in Northrend, and has taken many members of the Cult of the Damned as slaves. Angerboda denies the cultists any possibility of immortality as intelligent undead, which has caused much unrest among them. The val'kyr that did not join the Forsaken have sworn to follow Angerboda. The practice of vrykul warriors fighting to the death to earn the immortality of becoming undead continues.

Amal'thazad and the Cult of the Endless Cold Scourge 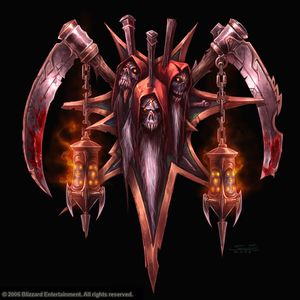 Cult of the Endless Cold

The lich Amal'thazad had served the Scourge faithfully for years, throughout its conquest of Lordaeron and subsequent campaigns against the living. He was rewarded with a high ranking position amongst the Lich King's most elite fighting force, the Knights of the Ebon Blade. After the battle of Light's Hope Chapel, Amal'thazad rejected the Lich King's rule and joined the rest of the Ebon Blade in a campaign of vengeance against his former master. With the death of the Lich King, Amal'thazad's desire for vengeance was sated, but his lust for power burned brighter than ever. The lich left the Ebon Blade along with many death knights and disciples loyal to him.

The Cult of the Damned was left leaderless in the wake of the Ashen Verdict's assault on Icecrown Citadel, and Amal'thazad seized the opportunity to bolster his growing army. Rallying them to his banner, he left little choice but for the Scourge necromancers and the remaining free liches to join him as well. Amal'thazad has already begun enacting his plan - a new plague of undeath. The forge-smiths have begun casting new plague cauldrons and spreaders, and cultists are gathering new ingredients uncovered by the Cataclysm for crafting deadlier plagues. Amal'thazad is ready to lead his new Cult of the Endless Cold to purge the living, just as his father, Kel'thuzad, had before him.

The necromancers and liches have brought immense dark magical might to Amal'thazad's faction, while the Cult of the Damned that joined him included the most skilled plague engineers and abomination crafters of the Scourge. Amal'thazad has adopted the early Cult of the Damned tactics of infiltration, sabotage, and biological warfare.

The Lords of Winter

When the Lich King died, his hold over his death knights vanished. For many once-noble warriors who had fallen to darkness, it was as if a veil had been lifted. They saw all that they had done in the Lich King's name with new eyes. More than one embraced destruction for his or her crimes. Others sought redemption, returning to their homelands or joining the ranks of the Ashen Verdict and standing watch over the dormant Scourge. Others chose a different path...

Irredeemably stained by evil, these death knights wandered into the endless wastelands of Northrend, alone with their dark souls. Some gathered followers to their sides, both living and undead. Others remained alone, solitary dark knights, traveling across Northrend seeking some new purpose. These renegade death knights pillage and destroy for many reasons - some for plunder and treasure, some for the thrill of battle and murder, and some because their loathsome souls have forgotten how to do anything else.

The renegade death knights are not an organized faction, but are made up of dozens of separate war bands. Some consist of a single death knight and whatever cronies have chosen to follow him, while others are large bands of marauders with several death knights acting as commanders. Lone death knights occasionally sell their services as mercenaries to the highest bidder.

The undead dragons that once darkened the skies of Icecrown have reverted to their instinctive behaviors without the mental dominion of the Lich King overriding their draconic wills. While the new Lich King has forced many of these terrible beasts into unnatural slumber, many more remain active, and a dire threat to any living creature in Northrend. Younger undead drakes have flocked to the sides of larger, more mature creatures, forming twisted mockeries of living dragonflights.

Some of the most powerful of the undead dragons have demonstrated troubling new abilities - their very presence seems to saturate the areas around them with necromantic power, causing the dead to rise from their graves and flock to the protection of the vile beasts. The undead will follow the wyrms even after they've departed, slaughtering everything in their path as they march tirelessly to the lair of the creature that raised them. Some undead dragons are amassing worryingly large groups of undead followers, and many are beginning to suspect that the wyrms are acting with a sense of greater purpose in mind.

The Deathflight is not a unified faction, but several undead dragonflights united only by their mutual desire for wanton destruction and their hunger to slaughter the living. Several undead dragons have become infamous, and have amassed great numbers of undead drake subordinates and hordes of undead followers. They are rapidly becoming a threat that the inhabitants of Northrend cannot afford to ignore.