The Spider Kingdom is vast, stretching across several regions. The portion that lies closest to the surface is the Upper Kingdom. This city complex is built into the stone and ice of the underworld, and is thousands of years old. Dark caves give way to nerubian architecture, stretching out far across the underworld and becoming lost in the distance. The Upper Kingdom was ravaged by the Scourge and many portions of it lie is disrepair. The new generation of living nerubians have barely begun to reclaim it, and their allies in Twilight cult have arrived in force to secure it.

Located in the Upper Kingdom is the fortress of Doorward, built by Baelgun Flamebeard and his dwarven explorers. The original expedition has been joined by members of all of Azeroth's races to form a new army, the Warders of the Dark, who have vowed to stand against the evil rising from the depths of the underworld. 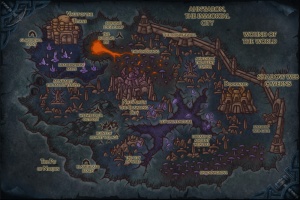 The Upper Kingdom of Azjol-Nerub

The outer regions of the zone are dark and cavernous, filled with twisting natural tunnels. Groves of giant mushrooms sprout along the banks of icy underground rivers, and walls of solid ice have sealed off many passages. The underground wilderness gradually gives way to the underground temple cities of Azjol-Nerub, which fill the western regions.

A more detailed overview of the Upper Kingdom's subzones can be read here.

- Doorward Underhalls - The lower reaches of Doorward are still infested with dreadful horrors from the depths of Azeroth.

- Vault of the Titans - The Vault of Archavon still holds many secrets.

Degaton's Vault is currently closed. It will be unlocked at a future time.

The Upper Kingdom is the first zone players will encounter upon entering the Upper Kingdom. Like all zones in the Spider Kingdom, there is no generalized level of content to be found - players can find challenges anywhere from level 90 to 93.

The Upper Kingdom at Level 90

The Upper Kingdom at Level 92

At level 92, players will return to the Upper Kingdom and venture in regions such as the Scourgewall, the Cinderbog, the Fallen Temple of Ahn'Kahet, the Silent Temple of Ahn'Dirac, and many others.

The Upper Kingdom at Level 93

At level 93, players will be up to challenge of exploring regions such as the Burning Pit, the Wintergrasp Undervault, and the dreaded Crawling City of Naz'Amun. The deadliest dungeons of the Upper Kingdom will also be available for exploration.

While flagged for PvP, the following regions will be phased into alternate, PvP related versions. Each region has different PvP objectives that periodically become available. Players in the Upper Kingdom can also queue for World PvP, which will teleport them randomly to any region where PvP activity is underway.