Vault of the Titans

Nestled within the valley of Wintergrasp is the sprawling Titan fortress known as the Vault of Archavon. The Alliance and the Horde have fought countless bloody battles to secure the facility and exploit the secrets that the Titans have locked away. Many adventurers have braved the upper halls of the vault and battled with the ferocious giants that dwell there, seeking the hidden wealth within. The Vault structure extends deep into the earth, stretching down far enough to meet the regions where the nerubians have constructed their vast kingdom. The giants that dwell in the upper halls are but the first line of defense...

Within the lower levels, known as the Vault of the Titans, greater peril and greater rewards can be found. The Twilight Scourge have arrived in order to capture the treasures of the ancients for themselves.

The Vault of the Titans is located in the north-western corner of the Upper Kingdom. It is situated directly below the valley of Wintergrasp, and consists of the lowest levels of the structure known as the Vault of Archavon. Archavon himself and his fellow giant watchers can be found both outside the walls of the Vault and just inside - they are non-hostile and will provide players with quests that explain some of the nature of the Vault. Archavon and his brothers reveal that they 'pretended to lose' against the various bands of adventurers that invaded the Vault during the War against the Lich King, taking advantage of the situation to get rid of their old junk. They have returned to their true function of safe-guarding the inner chambers of the Vault. 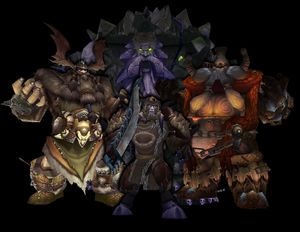 The bosses of the Vault of the Titans. 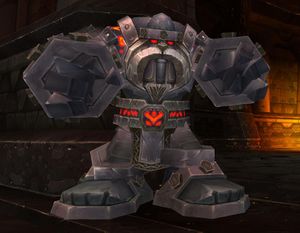 Twilight Champion Garak
A mighty champion of the Twilight Scourge, Garak leads the forces of Twilight in their raid upon the Vault of the Titans.

Sinjin the Immolator
The Fire Giant Sinjin was honored with stewardship of the Vault of Flames, where the Titans created magical prisons used to hold some of the most dangerous elementals ever to threaten Azeroth.

Sundarr the Storm-Forger
This mighty Storm Giant was chosen to watch over the Forge of Storms, a Titan machine responsible for the creation of some of their mightiest weapons, including the legendary hammer of Thorim, Krolmir.

Negalon the Shadow Watcher
A stone giant, driven to madness by the whispers of the Old Gods. Its body is partially composed of

Vaultguard Colossor
The most powerful of the Vault's automated defenses. It has been triggered by the Twilight Scourge and unleashed upon their enemies. Heroic Mode Only.

Heroic Mode for Vault of the Titans can be activated by players at level 93 after they've completed normal mode.