Warships are a new feature added with the Reign of Azshara.

Warships, like Garrisons, are highly customizable, player-specific areas. Warships act as essentially mobile garrisons - players will be able to sail their warship to various locations around Zin-Azshari, enabling players to choose where their base of operations is situated. Players need simply reach a suitable area in a specific zone to unlock the location for their Warship.

Players can also sail their Warships out onto the open seas for Adventures - random events where the player will contend with various challenges, obstacles, and enemies that stand between them and their goals. Battle marauding naga, vicious sea monsters, hostile races, and duel with a vast array of enemy pirate crews out on the open ocean, building up your notoriety and developing growing rivalries with pirate captains, culminating in duels to the death. Explore randomly generated islands to discover buried treasure or capture strategic locations. Fight for your faction's military dominance of Zin-Azshari, and maybe carry out a little piracy against the enemy faction while you're at it. Adventues offer a host of rewards depending on what type of adventure you complete.

Players are not alone aboard their mighty Warship - they will be able to recruit a vast crew of NPCs to join them on their adventures. NPCs not only provide functions to your ship itself but can be assigned combat roles so they can join you in battle. You direct the flow of battle and determine which NPCs will fight where, and how. NPCS can provide multiple types of support for the player - they can sell ever-improving supplies, unlock crafting stations, provide profession bonuses, and unlock upgrades to your Warship. Recruit a shipwright to make repairs to damage suffered during Adventures, or a beast-tamer to provide you with the ability to capture new mounts.

Improving your Warship and conquering Adventures will also allow players to unlock a new Legendary quest-chain, which will take them and their crew on an unforgettable journey across the most dangerous seas of Azeroth... and beyond. 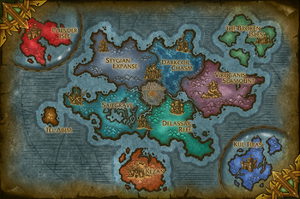 Adventure on the High Seas

Warships can be sailed to a friendly Port of Call every hour. Ports of Call can be found all across Zin-Azshari - some are unlocked through questing, others can be unlocked as easily as discovering the location. A Warship can be upgraded to reduce the travel time so player's may sale to more Ports of Call more often.

When a Warship is docked at a Port of Call, the area becomes a player-specific sub-zone - essentially a small base that the player now occupies. NPCs can be found here, some of which can be recruited to your Warship. If your Warship's crew roster is currently full, potential crew NPCs will take up residence at a Port of Call instead.

Ports of Call will offer various quests and Adventures. Each Port of Call will have different opportunities - visit them all!

Players can send out their warship to perform tasks on the high seas, which grants rewards in the form of recovered treasure. NPCs can be assigned to different roles on missions, which result in greater chances for success and rewards if their individual strengths and skills are properly utilized.

Players can either send the crew out on their own, or join them personally for the fun! Fight alongside your crew against hostile enemies! Players can not only battle directly against hostile NPCs, but also guide the flow of battle with commands to their followers, and utilize their Warship's own cannons and other weapon upgrades strategically against enemy vessels.

Players can also invite friends onto their ships for Adventures, or join a friend on their ship. Deal with difficult missions by bringing friends along! Some special missions require 5-10 players and involve tackling truly dangerous enemies!

The more crewmembers and ship upgrades a Warship has, the greater the number and variety of Adventures they can embark on. Players can choose specific types of adventures, from treasure or bounty hunting to exploring, strategic assaults, or counter-faction piracy!

One of the most frequent threats to be found on the Great Seas are pirate crews. When you face off with a pirate crew, there's a chance their captain may develop a grudge against you and attack again on another Adventure - they can even attack you across multiple different Adventure types, ambushing you while on a treasure hunt or in the middle of a monster attack! The more victories you win against them, the greater the hatred of the pirate captain will become, culminating in a final duel to the death for high stakes on the open seas!

Defeating pirate captain rivals will score you notoriety across the seas, as well as additional rewards from Adventures. You may even be able to recruit some of the defeated pirates as new crewmembers!

Players can sail their warship to Shipwreck Cove for a new series of Brawler's Guild matches! You can even participate in crew battles, pitting you and your NPC team against an enemy NPC crew for a chance to win prizes, including recruiting new shipmates!

Players who obtain sufficient notoriety on the high seas will come to the attention of Duke Hydraxis of the water elementals. The Abyssal Maw has been in chaos since the capture of Neptulon, and it needs your help! Join the struggle of the benevolent water elementals to prevent the seas from falling under the control of the evil Yodens - Prince of Dark Waters, the wicked son of Neptulon.

Chapter I - The Prince of Dark Waters

Sailing the seas of Azeroth soon reveals that the water elementals of the Abyssal Maw have opened numerous portals from the elemental plane to Zin-Azshari, forming an elemental army known as the Abyssal Sodality. Led by the son of Neptulon, Yodens, the water elementals are waging war upon all the mortal races of Azeroth. Yodens schemes to leave Neptulon imprisoned and usurp the role of Elemental Lord of Water from Azshara, and has directed his forces to attack both Azshara's naga and the forces opposing them. Another of Neptulon's sons, Noagan, opposes his brother and wishes to focus the Abyssal Sodality's might upon the naga. Noagan seeks the aid of a mortal champion to battle Yodens and his followers.

After gathering relics from the sunken ruins of the night elves ancient civilization, the champion banishes Yodens back to the Abyssal Maw and frees Neptulon, allowing the elemental lord to return to the plane of water as well. However, Neptulon has been driven to new heights of fury by his imprisonment, and vows to destroy all of Azeroth in retalliation. Noagan is forced to turn away from his mortal allies and return with his father, regretfully vowing that his next encounter with the people of Azeroth will be as an enemy.

Chapter II - The Vengeance of Neptulon

Neptulon has escaped his captivity in Azshara's palace and returned to the Abyssal Maw. The attempts of Neptulon's son Yodens to usurp his father's throne has been thwarted, and Yodens himself destroyed. However, Neptulon has vowed to take revenge upon all of Azeroth, and has unleashed his mightiest servants from the darkest depths of the Abyssal Maw. Ultimately, Naogan turns against Neptulon to stand by the mortal heroes of Azeroth and shares with them the secrets of defeating Neptulon's forces.

Neptulon gathers his strength within the Abyssal Maw, preparing to unleash devastation upon Azeroth.

Chapter III - Wrath of the Tidehunter

Neptulon has regained his strength within the depths of the Abyssal Maw, but still lacks his great trident Nergalis, which remains in the possession of Queen Azshara. Neptulon now intends the drain the very seas of Azeroth into the Abyssal Maw through the Maelstrom, devastating the world of mortals and swelling his own power to eclipse the other three elements combined.

The ancient powers of the Zandalari may hold the key to halting Neptulon's wicked plan, but that power lies within their shattered homeland of Zandalar. Brave the dangers of Zandalar to unlock the means to stop Neptulon.

Chapter IV - Breath of the Demon

Chapter V - Lord of the Waves

Neptulon launches an assault on the newly risen island of Ny'alotha to re-take his trident from Azshara and exact his revenge upon the naga matriarch. Neptulon's short-sighted assault has left him vulnerable - a portal to the Abyssal Maw lies open and lightly guarded. Naogan gives you a final edict - drive Neptulon back into the Abyssal Maw, then sail your ship into the elemental plane of water itself and put an end to Neptulon once and for all.