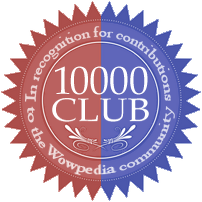 "The task of leadership is not to put greatness into humanity, but to elicit it, for the greatness is already there."

My name is Joshua Underwood (alias Joshmaul, born June 5, 1987), and I live in Holbrook, Massachusetts (previously in Lowell, and before that, Poway, California). I began playing World of Warcraft on September 6, 2005, and I love when people try to harass me by making articles that insult me, and mess with my user pages making fun of my weight, the fact I have no life, so on. It proves my intellectual superiority over such individuals, and their jealousy at my godliness. Kneel before Joshmaul, mortals. *grin*

I beta-tested Burning Crusade, Wrath of the Lich King, and Mists of Pandaria, and Legion. I won a BC beta key from Stratics on November 17, 2006, and on August 28, 2008, my stepfather gave me the key he had won for WotLK. No luck in Cataclysm, but I made up for that by PTRing Patch 4.0.3 and ordering the Cataclysm collector's edition. I beta-tested MoP as an annual pass holder starting on March 30, 2012, and subsequently bought the Digital Deluxe Edition. I pre-ordered the DDE for Warlords of Draenor, and subsequently entered the beta test for that on August 19, 2014; I then pre-ordered the DDE for Legion, and entered that beta test on May 12, 2016. I pre-ordered Battle for Azeroth when it became available on January 30, 2018, and was invited into the alpha test (a first for me!) on March 23. I preordered Shadowlands at BlizzCon 2019, and was invited into the beta on August 20, 2020.

I retired for a period from WoW as of March 31, 2013, and (after two free weeks in the interim during the summer) returned on December 7.

These are all the important heads/parts I've taken from instance bosses, major quest givers, so on:

The legendaries I've picked up (so far), and who with, or the progress I've made on others: