The Darkspear is the premier all-Troll guild on the Scarlet Crusade role-play server. It was founded by Caeljin on 3-13-05 and offers players four+ years of experience with World of Warcraft. The Darkspear provides numerous opportunites for fun and engaging gameplay, including a variety of social and questing events, and most importantly a mature and helpful atmosphere. The Darkspear is currently recruiting. 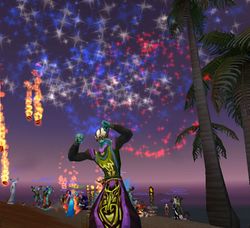 The Darkspear be jammin!

The Darkspear is a role-playing guild whose 90+ members enjoy all facets of World of Warcraft: quests, instances, world player versus player (PvP), battlegrounds, arenas, and end-game raids. Its members also devote a considerable amount of time to role play and social events, including fishing tournaments, story circles, Troll rites and rituals, and all kinds of gatherings that celebrate the joy of being a Troll. Whenever possible, these things are done in-character (IC) and in keeping with the fundamental goals of the guild. The Darkspear welcomes mature individuals who follow most styles of play: groupers, soloists, socialites, heavy gamers, casual types, and dedicated role players. They do not accept power levelers, leet speakers, or disrespectful behavior.

The IC goals of The Darkspear are to ensure the survival of the Troll culture, reclaim the tribe's ancestral lands in Stranglethorn Vale, put an end to the Hakkari menace and other threats to the Troll race, and defend the Horde lands against all enemies. Out of character (OOC) goals of The Darkspear are quite simply to assist its members in having the most fun possilbe and helping them master all the amazing components of the game. It does this through creating a "family" atmosphere; every guild member is brother or sister, and they all look out for one another and lend a hand — or advice, or a few gold coins — whenever possible. 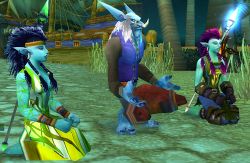 The Darkspear is an all-Troll guild, which means that, while most of its members are friendly with other races, only Troll characters may join. The Darkspear does not restrict its members from creating alts of other races and joining other guilds. Although World of Warcraft only allows players to create Troll characters of the Darkspear tribe, many players who engage in RP are willing to accept that certain Troll characters are from other tribes (Sandfury, Bloodscalp, etc.). The Darkspear will allow guild members from any Troll tribe, as long as the character gives sufficient reason why he or she deserves to join. NOTE: Some guild members may dislike non-Darkspear Trolls, and the guild respects their right to do so as long as things remain civil and IC. 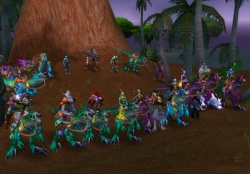 The Darkspear mount up.

The Darkspear guild should not be confused with the Darkspear tribe. While some characters in the guild are Darkspear Trolls, many of them are not. The shared premise is that The Darkspear guild is an offshoot of the Darkspear tribe in Sen'jin and has been charged by its elders to seek the Troll race's best interests as a special warband operating inside the Horde. As such, some members of the guild accept the leadership of Thrall while others do not — instead looking to Master Gadrin, Vol'jin, King Rastakhan and/or the guild's leader as the highest authority. Though the guild has denounced cannibalism, as all Darkspear Trolls have, there are rumors that some guild members have not given it up. Similarly, some members of the guild still practice archaic forms of voodoo and worship the Loa while others follow more modern paths. Members of The Darkspear run the gamut from civilized to savage, berserker to scholar.

The Darkspear down Hakkar.