User:Lon-ami/World of Warcraft: The Age of Nightmare

World of Warcraft: The Age of Nightmare is an Emerald Dream fifth expansion idea by Lon-ami.

The expansion introduces two new playable races, one for each faction. Both of them have their own two starting zones. The first one is instanced, and thus exclusive for the race. The second one is available for everyone, and will later act as the location for new scenarios.

Ten thousand years ago, at the end of the War of the Ancients, the Great Sundering tore Azeroth apart, sinking the center of the original single continent and pushing the remaining lands afar from their original locations. The Highborne, responsible for opening the portal for the Burning Legion, and therefore of causing the war, were trapped in the middle of the Sundering, unleashed by the implosion of the Well of Eternity. About to get drowned, at the bottom of the sea, the Old Gods made a pact with Azshara, their queen, and the naga were born.

However, the Highborne weren't alone between the first naga. Other night elves trapped by the disaster were caught by Azshara's pact, and forcefully transformed into naga as well. Most of them saw their new forms as a blessing from their former queen, for no matter the war, most believed Azshara still loved them, and were unaware or didn't want to believe she was the greatest responsible for everything. But some knew or saw the truth, and rejected her.

Azshara founded a new naga empire, ruled by her alone as the supreme empress and goddess, and rebuilt Zin-Azshari as Nazjatar, the new capital of the empire. The empress didn't like the seeds of rebellion coming from those who didn't trust her, and slaughtered all of them before they could pose a threat. However, between those "rebels", some knew of how she slaughtered the original citizens of Zin-Azshari, and took precautions, staying in the shadows, and exiling themselves when their comrades fell to the empire.

Since then, the rebellion has stricken here and there, slowly winning the support of the rest of their race. New generations of naga were born, and not all of them saw Azshara as their goddess. Some revered Neptulon, and others worshipped the Old Gods themselves. A minority of the lower castes even still revered Elune, the original goddess of the night elves, no matter how hard Azshara punished them, outright killing them or sending them to the slave camps of the Seaspire Plateau. Now, the Old Gods have started to move, and Azshara's part of the pact must be fulfilled. The slaves and pariahs of the naga society know they don't stand any chance, and that their only hope lies beyond the empire, together with the rebellion.

The Apexis were the most advanced arakkoa sect of Draenor. Their civilization was unparalleled, and only the draenei could compete with them. Their knowledge on planes and other worlds was astonishing for a race that had never left their lands atop Blade's Edge Mountains. Inexplicably, some day their creations turned against them. They send messengers asking for help, but neither the other arakkoa nor the draenei answered. Only a few orcs of the Thunderlord clan came to their aid.

However, the battle couldn't be won in any way, and they were forced to run away to the primordial plane of nature, with the noble orcs staying behind to help them escape. Inside the plane, they discovered they had been trapped by a dark cult of their own race. Unable to escape, they resigned themselves and fought to build a new home in the savage plane, while the rest of their race fell to the dark cult and lost their original essence, becoming parodies of their former selves.

Years later, a disturbance on the very fabric of Draenor and its planes merged their homeworld with another, strange world. The new world, called Azeroth, had similar planes to those of Draenor. With their own plane tore apart, the Apexis moved beyond the new borders and entered the plane of Azeroth, where they were able to live in peace for many years... until now.

The plane of nature of Azeroth, called the Emerald Dream, has powerful defenders Draenor's lacked, but still, they can't protect themselves from the dark forces trying to destroy it. Even worse, the dark hand behind those very forces seems to be the same behind the other arakkoa that betrayed the Apexis decades ago. Unfortunately for them, the Apexis won't lose their home for a third time, and they will fight back and send darkness back to where it belongs.

Unlike most of the previous expansions, the new zones don't compose a new continent. However, unlike World of Warcraft: Cataclysm, the separate zones are heavily linked by static portals converging into Heart of the Dreamer, which is also linked with classic zones and a capital city for each faction: Darnassus and Silvermoon City. The Heart of the Dreamer will play a special role across the expansion, working as a major hub, being visited by the players between each zone, and using heavy phasing to represent the advance of the Emerald Nightmare and the inevitable reopening of the Rift of Aln, leading to the final zone, Depths of the Nightmare. 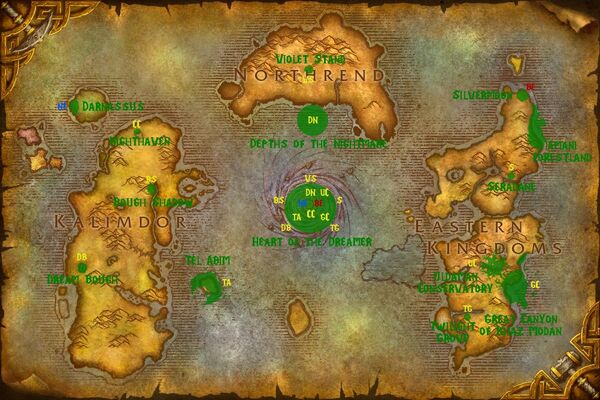 Locations of the new zones and portals.

The heroes will be able to follow two paths to start their adventures against the nightmare. The first path will be by boat with their respective factions, sailing directly to Tel Abim. They will clear the coast, repel the local creatures, set up an encampment and enter a mysterious nightmare rift. Alliance and Horde players will land at opposite corners of the isle, and won't meet each other until until later. The second path will be by joining the Cenarion Circle to help them contact the green dragonflight. They will use a secret path, hidden in the coastal cliffs to the north of Nighthaven, to reach the Sleeping Gardens, the lair of the green dragons, where they'll get what they need to open their own portal to the Emerald Dream. At this point, the heroes will join together and follow the same path, doing some quests on Heart of the Dreamer. Once they are done with the first phase of the heart, they'll return together to Tel Abim to investigate what's behind the isle's corruption.

Eventually, as they progress, the heroes will visit the heart repeatedly, and find it different each time, changing to show the growing corruption. At the beginning, the heart will be a peaceful place, but as the heroes complete the first storylines, they'll return to see desecrated fields and dark clouds, which will keep growing until the Rift of Aln is opened and the siege is successfully repelled, returning the zone back to normal. The heroes will travel across the zone to reach new unlocked zones, and they'll be able to activate portals to the various Great Trees in different parts of the world, effectively making the heart the center of the expansion, and making the different zones feel connected to each other as if they formed a single continent.