Fresh from their victory at in Andorhal,[1] the forsaken plan to take all the northern part of the Western Plaguelands. Chillwind Camp is the only outpost left standing in their way.

The washed up commander has raised the white flag and is ready to leave the camp. Thurman on the other is prepared for the battle of his life. Three advanturers came across a poster and have answered the call, they are now ready to fight to the bitter end. 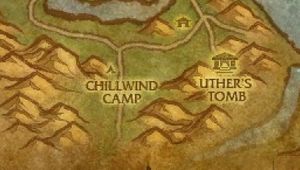 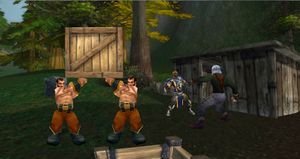 Thurman confronts Ashlam about his decision.

Defend Chillwind Camp until the militias are armed.

Distract the incoming Forsaken Vanguards while the Provincial Settlers are arming themselves.

As the scenario begins, a short cutscene introduces the situation:

Thurman Grant says: Champions, thank you for answering the call. Please, defend us while we equip some armor. 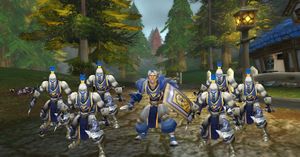 Thurman Grant comes out of the house and the join the players with his armed Provincial Settlers. 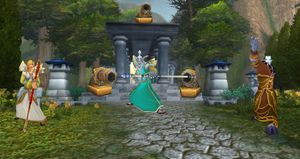 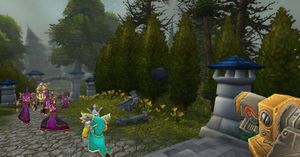 The cannons in action.

Fight off the Ambermill Mages and Forsaken Catapults, hold them off until the knights arrive. One can use the Turrets in the area. Lord Grayson Shadowbreaker and four paladins come out from a portal created inside the tomb. The remaining forsaken forces flee. 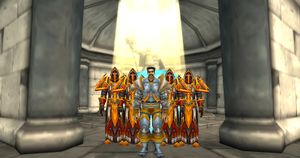 The Knights of the Silver Hand and Lord Grayson Shadowbreaker arrive.

Go to Flint Shadowmore by running or using a mount. 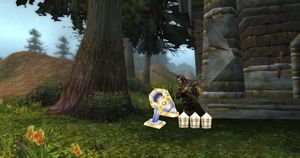 Flint Shadowmore trying to learn how to control the gizmo.

Flint Shadowmore goes behind a tree.

If Flint hits a player.

If Flint hits the correct spot 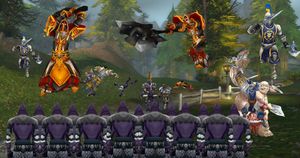 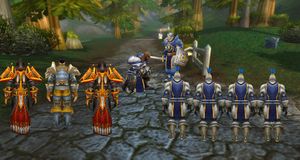 Destroy the invaders and defeat their leader.
You return to the camp to find that the forsaken are attacking and a zeppelin is on the top of it. The knights and the farmers are fighting the undead.

Defeat everything you see until Legionnaire Hardlim shows up, then defeat him. 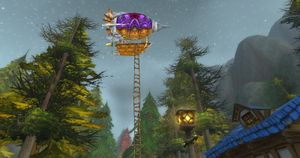 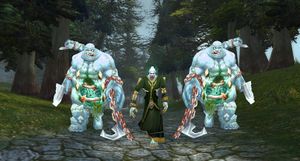 Grab the rope on the ground to climb on board and activate the bombs in the basement. You have only 5 seconds so grab a parachute from nearby and jump off the balcony.

As a horde player you will become a human.