Hello there. As you can see, I am Toran Wildpaw of the Frenzyheart Tribe. I shall be editing every now and again. I don't do too much however.

Nothing is known of Toran Wildpaw's early childhood. It is known, however, that he was once friends with Loguhn. Some speculate that he is even Loguhn's brother.

Things that describe me 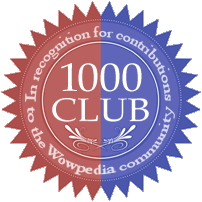 This user is a respected member of
the 1,000 club!
Retrieved from "https://wow.gamepedia.com/index.php?title=User:Toran_Wildpaw_of_the_Frenzyheart&oldid=2790828"
Categories: