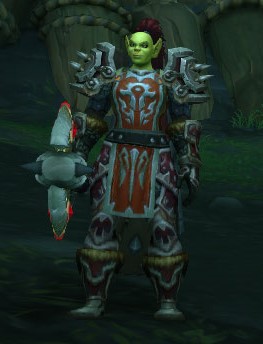 Usha during the Faction Assault on Stormsong Valley. 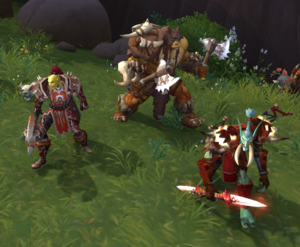 Usha Eyegouge is a level 120 elite Alterac Valley battlemaster located at the Horde entrance to Alterac Valley in the contested territory of Hillsbrad Foothills. She is riding a black wolf. She also trains grunts in Orgrimmar.[1]

She later visited Mechagon Island where she acquiesced to Prince Erazmin's request to not engage against the Alliance, however, she encouraged Horde adventurers to join the fighting that erupted at the Western Spray, which was out of the sight of the Rustbolt Resistance.[5] She revealed that she discovered found a place outside of Rustbolt were a free for all fighting was taking place.

I am sorry <class>, but you need to be more experienced before you can survive in Alterac Valley.

The prince of this place thinks he can tell us not to kill Alliance scumbags?

BOAR'S DUNG! I kill Alliance scumbags whenever I damn well feel like it.

Found a place outside town where the fightin' rules aren't as strict. You in?

That is, if the baby prince hasn't melted your heart with his soft, cuddly words...

<Usha throws back her head and laughs.>

I'm not afraid of a fight. Where's the action?

<Usha spits at your feet.>

She may be related to Oro Eyegouge.