Utgarde Keep (pronounced OOT-ghaard) is the name of a keep which is the location of two dungeons in World of Warcraft, as well as the first dungeon of the same keep (see below). The keep is located on the shores of Lake Cauldros in the Howling Fjord of Northrend.

Utgarde is inhabited by the vrykul (led by King Ymiron), a Viking-like race bent on proving their strength to the Lich King, who will raise the most worthy of their warriors to serve him beyond the grave. Enemy encounters within the keep include vrykul, their minions (such as worgs), and various types of undead.

The first of two wings, known simply as Utgarde Keep, was available for play at BlizzCon 2007. It is suitable for a 5-man level 70-72 party.

The second wing, Utgarde Pinnacle, is a more difficult, 5-man instance for level 80 players. Besides the Keep and the Pinnacle, there are also the Utgarde Catacombs.

Both wings also have a Heroic setting for level 80 players. 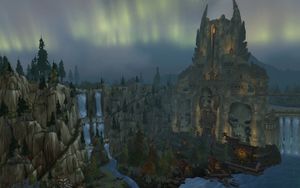 The vrykul are a race of half-giant warriors native to the Howling Fjord located in southeastern Northrend. It is said that, in ancient times, the vrykul inhabited the land, founding a vast and prosperous civilization. Then one day, without warning or explanation, the vrykul vanished, leaving behind only deserted villages and abandoned temples. Due to the settlement of Valgarde, the vrykul have recently returned. Loyal to the slumbering King Ymiron, rumors abound that they serve the Lich King. They are savage in nature, and tie into the titan creation myth that is slowly unfolding as events of the expansion take place.

These formidable warriors have begun attacking Horde and Alliance settlements, and many of the vrykul are pouring out of the fortress of Utgarde Keep, not far from Valgarde. The vrykul's motives and their whereabouts for the past several thousand years remain a mystery.

Inside Utgarde Keep, the Dragonflayer clan builds massive engines of war and train proto-dragons to act as steeds for their raids.

Utgarde Keep was long thought to be abandoned, a relic of a lost civilization among the central cliffs of the Howling Fjord. Yet in recent days something has roused the fortress' slumbering residents, the vrykul.

Feared to be allied with the Scourge, the savage race now terrorizes nearby settlements. With ferocious proto-dragons at their command and unparalleled prowess in battle, the vrykul pose a direct threat to Horde and Alliance campaigns in Northrend. Perhaps the only way to break the will of Utgarde's denizens is to defeat their revered leaders - but any heroes who fail in this task will surely become trophies to line the ancient halls of the vrykul fortress.[1]

Utgarde Keep is their main base of operations and is similar to the fel orcs' Hellfire Citadel.