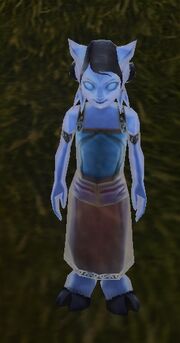 A sweet little ghost girl. Will you be her friend? 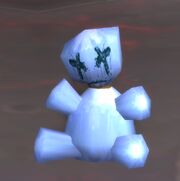 You can't fight the dark without a crown, friend. It's the rules. 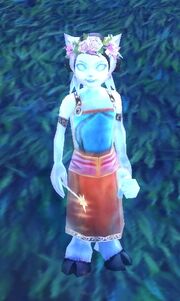 My light is super strong!

A ray of light shines down from above enveloping Uuna. 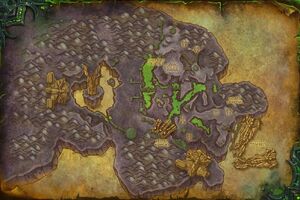 [Call of the Devourer] and completing a ritual with it. See that article for more information.

Uuna will reappear in Shadowlands.[1]

Uuna was found bound to an Ur'zul, and was released into the Shadowlands, where she wandered in the utter darkness.

Uuna has a few lines of random idle chat and a series of reactions to certain emotes and situations when done in the following order.

Saving Uuna involves a short storyline now that all of the hints have been found.

Perform the following actions in order to advance the storyline. Additionally, this macro can be used to track progress:

Touch the tear to enter A Dark Place, a short scenario.

Start by running forward to Uuna, then /cheer at her:

Uuna says: Friend? Is that you?
Uuna says: I won't give up, friend! I promise!
Uuna says: I'm just so cold, and it's very dark here. I don't know what to do!

[Cooking Fire] or similar fire next to her:

Soul-Eaters will appear at the edges and slowly creep towards Uuna, few at first, their numbers gradually increase. Run into them to scare them away, as they cannot be targeted with spells or abilities. Uuna will also help by firing shots from her wand. After about 2 minutes, Uuna starts losing hope:

Uuna says: Friend? Are you still there? I'm scared!
Uuna says: I--I can't do it! I just wanna go home!
Uuna wraps her arms around herself and begins to cry.

The darkness can only be kept at bay for so long, so /hug her to encourage her:

Uuna says: F-friend, you're here! You didn't leave me!
The Soul-Eaters will stop where they stand, held back by the powerful light emitted by Uuna
Uuna says: Mama told me the Light would always find me. That's you, friend. You're my light!
Uuna says: And as long as light is with me, there's no way the darkness can win!
Uuna says: My light is super strong!
Uuna yells: I'M NOT GONNA BE AFRAID ANYMORE!
Uuna's light evaporates all Soul-Eaters in sight
Uuna says: The darkness is gone! I can see!
A ray of light shines down from above, enveloping Uuna
Uuna says: What... What's happening?
Uuna says: The light... it's telling me to follow it...
Uuna says: Mama! Papa! They're waiting for me!
Uuna says: Wait a sec...
Uuna says: There's so much I never got to do. So many places I never got to see...
Uuna says: Is it okay if I stay with my friend? For just a little while longer?
Uuna says: Friend! The Light says I can stay! Woo-hoo!
Uuna says: Tell Mama and Papa I miss them, and... and I'll see them soon!
Uuna says: Okay, friend, let's get outta here! We have so many places to go!
Uuna hugs you.

Should a Soul-Eater reach Uuna, the encounter will have to be restarted:

Now it's time to go on a world tour!

As before, the following macro can be used to track progress:

This is the end of Uuna's big first adventure. As a reward for completing this story, she will now return hugs!

Uuna says: Thank you SO MUCH for showing me this, friend!
Uuna says: You've shown me so many neat things. You really are the best friend ever!
Uuna says: I know someday I'll have to go back to Mama and Papa.
Uuna says: But... not yet.
Uuna hugs you.

Previously: One of the many children thought lost in the battle for Argus, only to find themselves infused into an Ur'zul.