From Wowpedia
(Redirected from Vaelan)
Jump to: navigation, search

This article is about the story of the red dragon Vaelastrasz. For his raid encounter, see Vaelastrasz the Corrupt.
"Vaelan" redirects here. For the draenei death knight, see Vaelen the Flayed.

Vaelastrasz, or Vaelan in human form, is a dragon of the red dragonflight who fought against Nefarian, but ended up being enslaved by the black dragon within Blackwing Lair, where he served as second boss of the raid.

Since the Cataclysm, as he was killed by adventurers in Blackwing Lair, he was replaced by Acride. 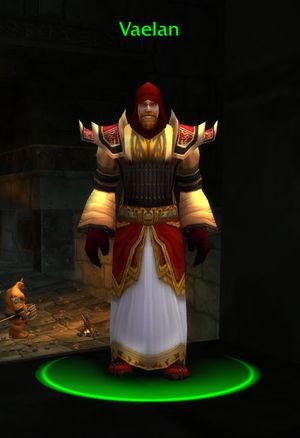 Vaelan swore to hunt Nefarian and the black dragonflight until the end of his days. Disguised as a Scarshield Infiltrator, he infiltrated Blackrock, where he was joined by adventurers who possessed an

[Unadorned Seal of Ascension]. The seal had three empty sockets, which had to be filled with three gemstones representing the leadership's command, the Smolderthorn, the Spirestone and the Bloodaxe. Finally, the seal had to be forged in the flames of the black dragonflight.[3]

Few of the black dragonkin, outside of those in the upper citadel, had the ability to forge the seal with their own flaming breath. Overlord Wyrmthalak, master of the lower citadel, was one such dragonkin, but he would never do it willingly. Instead, the adventurer was sent to the Wyrmbog in Dustwallow Marsh, where they broke the will of the ancient black drake Emberstrife. Using the

[Orb of Draconic Energy] on his weakened form, the adventurer managed to take control of his mind and directed his fiery breath toward the seal. Returning to Vaelan, the red dragon cast the final invocation of protection, imbuing the artifact with powerful protective wards. The

[Seal of Ascension] was complete.[4]

When the heroes confronted Rend Blackhand, they used the Seal of Ascension to summon a projection of Vaelastrasz, who helped them take the leader of the Dark Horde down. Vaelan later tracked Nefarian to Blackwing Lair and engaged in a direct confrontation with him. As the heroes entered Shadow Wing Lair, they witnessed Nefarian, in his human form, magically bending Vaelastrasz to his will. Unleashing the red dragon upon the newcomers, Nefarian retreated from the scene. Before the corruption took completely hold of him, Vaelastrasz blessed the heroes with a fraction of his power, before being forced to face them, and die by their hands.

Vaelastrasz was the holder of a shard of the Scepter of the Shifting Sands, which Nefarian stole from him.[5]

[Seal of Ascension] and Vaelastrasz the Red will come to fight with next dialogue during it.

In decades past - of now ancient wars and conflicts - our kind was driven to the brink of extinction. Much we have endured, <race>. The onslaught of the Burning Legion. The Demon Soul. The Aspects divided. The ascension of Deathwing. The enslavement of our Queen, Alexstrasza, by the Dragonmaw. Through it all, we have been the unshakable will of the dragons - the undaunted force that has fought to represent our waning existance[sic] in this world.

Vaelan could be found on a platform above, to the left, just as one entered Hordemar City (Hordemar City is the first area of LBRS after the entrance-hall area). First, players would clear the immediate area. Then they would walk down the rock rumble to reach a path leading straight upwards on the left. It can be dark here and difficult to see. As Vaelan was approached, he'd instantly turn into his human form.