From Wowpedia
(Redirected from Vagath the Betrayed)
Jump to: navigation, search

Not to be confused with Talgath.

Vagath is a nathrezim who was once loyal to Illidan Stormrage. 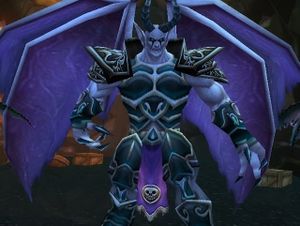 Vagath was one of Maiev Shadowsong's jailors alongside Zandras and Akama. Vagath was very arrogant and mocked Maiev, threatening to torture her.[1]

When an adventurer went to the Warden's Cage, Vagath arrived at the prison and questioned Akama about the intrusion. Akama tricked Vagath into believing that all was well by pretending to kill the adventurer.[2]

When the Sha'tari and the Ashtongue Deathsworn later attacked the Black Temple, Vagath declared Akama a traitor and sought to stop the intruders from entering. Accompanied by Illidari Shadowlords, he attacked the invaders[3] but was ultimately slain by Maiev.[4]

Now called Vagath the Betrayed, he appears as a rare mob in Nath'raxas Hold in Krokuun on Argus, having returned to the Legion's service. Illidan seeks his death and remarks afterwords that his punishment in Antorus will be severe.[5]

After completing the quest entitled Akama, a small scripted event between Akama and Vagath occurs. Vagath arrives with two demonic minions and yells out:

Vagath says: Mortals, here? What is the meaning of this, pathetic Broken!
Akama whispers: Have no fear, <race>. Just play along.
Akama "kills" the player and reassures Vagath.
Akama says: A mere nuisance, I assure you! Tell the Master his prisoner will not escape while Akama and his Deathsworn watch over her.
Vagath says: You'd do well not to toy with me, Akama. Illidan has given me strict orders to keep watch on the Warden. If I find out you are hiding anything from me, I will crush you with my bare hands!

Black Temple
You've sealed your fate, Akama. The Master will learn of your betrayal!