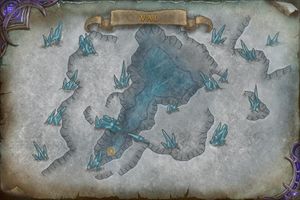 Map of the Val scenario.

Val is a world that has long fallen to the Legion. The climate is way below freezing temperature and anyone caught in it will die in a matter of seconds. After being conquered by the Legion, the demons planted braziers to make the cold bearable. The Legion now uses it to hold their prisoners while inquisitors steal their secrets.

In Legion an Invasion Point connects Argus to this location.

When first arriving, one has to perform three stages. Stage one consists of defeating the legion forces. These come in Wicked Corruptors, Felrage Marauders and Blacksoul Inquisitors. Stage two requires you to free the demon hunters in the ice. Once all twelve demon hunters are free, the boss appears. Stage three requires you to take down the boss.

Because of the freezing cold, the demons have planted braziers to keep them warm. When standing next to one, you will be healed for 1% of your maximum health every 3 sec. However, this effect also works on the demons and they will also be healed.

P.S. The demons do not suffer from Crippling Cold.

After defeating the demons and freeing the demon hunters, you will get an option to fight a boss. 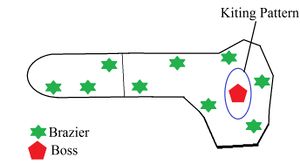