Val'zuun is a man'ari eredar informant of unknown origin[1] found sitting in an alcove of the Underbelly Descent in Dalaran.

He is one of the Uncrowned contacts that subtlety rogues in search of the Fangs of the Devourer speak to in order to learn the whereabouts of the eredar assassin Akaari Shadowgore, who wields the Fangs. Val'zuun tells the rogue that Akaari is already present in Dalaran, spying for her masters, but says that he won't reveal her exact location until the rogue brings him a rune of portals.[2] After Valeera Sanguinar and the subtlety rogue "borrow" the rune from Archmage Celindra, Val'zuun informs them that Akaari is at the Legerdemain Lounge.[3] However, once the rogue confronts and defeats Akaari, it is revealed to be a ruse: Akaari's body transforms into that of a Shadowgore Bloodmaiden upon death.[4]

Valeera confronts Val'zuun, but he claims that he did not know about the plot and says that he can open a portal to Akaari's stronghold using the rune of portals he was provided earlier.[5] Keeping his promise, Val'zuun creates a Twisted Gateway to Shadowgore Citadel and guides the subtlety rogue through the fortress from afar, allowing the rogue to confront the real Akaari, kill her and claim the Fangs of the Devourer. When the rogue returns, Val'zuun congratulates them on their victory and tells them that Valeera is awaiting their return, before he walks off into the Underbelly and disappears.[6] 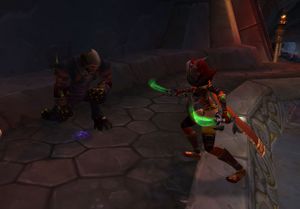 He needs to be spoken to during

What brings you to this lawless place?

What are you exactly?
I provide information that no other can.

That is all you need to know.