“I saw the answer. For in life, there exists death, and in death, there can be life. But there are only beings of life and beings of death. My messengers must span both realms. They will be formed from the vrykul, and their bravery shall preserve their brethren as Valarjar for all time. Like life, they shall be powerful. Like death, they shall be eternal.”

Val'kyr are a type of ascended female vrykul. The original Val'kyr are warriors of the Light created to serve the Prime Designate Odyn by bringing the spirits of the glorious dead to his Halls of Valor. The Val'kyr of the Scourge acted as the Lich King's agents in the spirit world and were described by Thoralius the Wise as fearsome creatures made of pure nightmare.[2] After the defeat of the Lich King, several Val'kyr now serve the Forsaken under Sylvanas Windrunner.

The first Val'kyr was Helya, a titan-forged sorceress who was the adopted daughter of Keeper Odyn. Odyn, having disagreed with the creation of the Dragon Aspects, offered vrykul warriors who died in glorious combat to become part of his Valarjar. To take the spirits of these departed vrykul from the Shadowlands and into the Halls of Valor, Odyn transformed Helya into a Val'kyr, against her will,[3] which would ultimately cause her to rebel against Odyn with the aid of Loken. Odyn's inspiration for the Val'kyr were the Kyrian, which he saw when he gazed into the Shadowlands.[4]

The original Val'kyr are ascended vrykul warriors of the Valkyra, who prove their worth to Eyir in order to become Val'kyr.[5] As Val'kyr, they take worthy vrykul warriors who die with glory in battle to the Halls of Valor, where they will feast and battle for eternity as part of Odyn's Valarjar. Val'kyr are considered "sunborne" when they are honored in the presence of Odyn.[6]

From the vrykul in his service, the Lich King learned of the Val'kyr and their ability to corral spirits and even delve into the Shadowlands, the realm of the death. The Lich King tried to create his own Val'kyr, but the task proved difficult even for him. After missteps, he finally succeeded and the Scourge Val'kyr were born. The Val'kyr greatly enchanted his ability to control the dark powers of undeath.[7]

The vrykul bard, Helgus, who lived in the town of Nifflevar, wrote three sagas, one of which was the 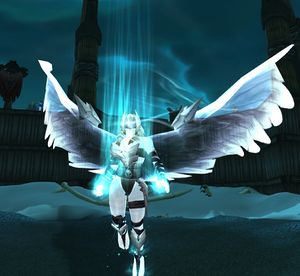 The Scourge Val'kyr were described as warrior maidens of old and each was the greatest warrior of her generation. They are sisters who served the warriors of the north in life, and chose to continue [their] service in death.[9] An unknown amount of them were created from the female vrykul of Valkyrion, who fought and trained to receive the Lich King's unusual gift.[10] At least one example exists of a female vrykul being turned into a Val'kyr at another location as well. Those that were deemed worthy underwent the transformation from vrykul to Val'kyr. It is said that the Val'kyr serve to judge the fate of vrykul combatants, transforming the favored contestants to Ymirjar, and the failed contestants to the ranks of the undead Vargul.[2] Val'kyr are considered "unborn" until they vanquish a creature of high nobility.[11]

Beyond this, the Val'kyr Battle-maidens also watched the fates of the training death knights of Acherus, making sure the newly born warriors didn't fall in battle before their time. These Val'kyr were acting much like spirit healers. If they fell in battle, the Val'kyr would return them to their unlife. During the Battle for the Ebon Hold shortly after the death knights were freed, they were aiding the remains of the Scourge.

The Val'kyr Annhylde the Caller was a part of the Ingvar the Plunderer encounter in Utgarde Keep. Upon Ingvar's death, Annhylde judged Ingvar and found him unworthy. Annhylde resurrects him as Vargul and begins phase two of the fight giving him a second chance.

Fjola Lightbane and Eydis Darkbane are two very powerful Val'kyr that were originally sent by the Lich King along with their Vengeful Val'kyr army to disrupt, destroy, and terrorize the Argent Tournament and its citizens. But during this attack, Argent Confessor Paletress came to the defense of the tournament and battled the twins. Paletress was victorious, and Fjola and Eydis were captured. Their bonds were maintained by Priestess Alorah and Priest Grimmin. They later appeared as the final challenge of the coliseum after the raid defeated the Faction Champions.

After the events took place within the Icecrown Citadel, and the death of Arthas, only nine of the Scourge's Val'kyr remained in the world. These nine, led by Annhylde the Caller, were bound to the will of their new dormant Lich King. Imprisoned atop the Icecrown, possibly for eternity, they hungered for their freedom. To gain this freedom they needed a vessel, one like them, a sister of war, strong, and who understood life and death. Someone who had seen the light and the dark. Someone worthy of power over life and death. Sylvanas Windrunner, after having just committed suicide off the Frozen Throne, was shown what would happen to her people and herself if she was gone. Using this information, they convinced her to make a pact with them. In this pact, the Val'kyr would be free of the Lich King forever, but their souls would be bound to the Dark Lady. Sylvanas will walk with the living once again but through the sisterhood of the Val'kyr. As long as they live, so too will Sylvanas. All of them will have their freedom, life, and power over death.

Sylvanas agreed to this pact if only to prolong her fate, which filled her with terror. Annhylde took Sylvanas's place in death as the pact was made and the remaining eight sisters were bound to their new leader.[9]

Part of the Forsaken

The Forsaken had one major flaw working against them; they could not reproduce. The Lich King was the one who created the Scourge, and now that the Lich King was gone, there were no Scourge left to turn to Forsaken. The Val'kyr were her salvation and solution to her dilemma. Since the Val'kyr could raise the undead, they were essentially the key to keeping the Forsaken "alive" as a viable race. After leaving Northrend, a few of the Val'kyr were sent to the Deathknell Graves to "recruit" any remaining corpses there into the Forsaken, while the Dark Lady made her way to Silverpine to prevent her people from being slaughtered by Garrosh's command. With her were the rest of the Val'kyr making their presence known.[9]

After Garrosh backed down and allowed Sylvanas to take command of the campaign for Gilneas, Sylvanas had decided that her people would no longer be carelessly used or squandered away for some orc.[9] They would be used wisely and with a purpose, as a bulwark to safeguard her and their kingdom. A bulwark that grows stronger as the Val'kyr raises the living's dead to bolster their numbers, even with former enemies joining their ranks. This is due to the fact those raised by the Val'kyr who die in combat or under extreme stress, enter into a violent, frenzied state. Undead in this state are easily manipulated and their rage is often directed at the foes of those who raised them. After the effects wear off, the remaining resurrected are given the option of joining the Forsaken or being returned to the grave.[12]

The Val'kyr themselves have been deployed into several battles since their conscription, notably throughout Silverpine and Andorhal, both of which were sound Forsaken victories due to the Val'kyr's input. However, the Val'kyr were only able to reanimate human corpses as Forsaken.[13] The humans trapped in the conflict with the Forsaken sought to escape that fate by turning into worgen, and thus the surviving leaders and refugees of Hillsbrad Fields and Southshore were willing to take the worgen curse and became Hillsbrad Worgen to prevent the Forsaken from raising them into undeath.[14]

When Sylvanas was killed in Silverpine Forest, Agatha, Arthura and Daschla sacrificed themselves to revive her once more.[15] Then later in the battle at Andorhal, the Alliance would kill Aradne, thus leaving only four dark Val'kyr in existence. It's unknown where they currently are, but they're likely in a safe area continuing to raise more Forsaken members. 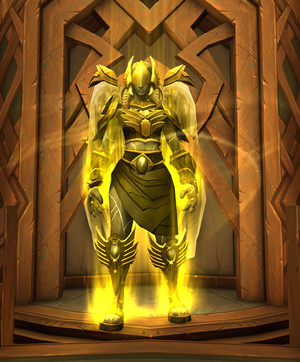 During the battle at the Broken Shore, Sylvanas called her Val'kyr. Two of them took Baine and Thrall to her position and later, five of them arrived and picked the bodies of fallen heroes of the Horde.

The Val'kyr loyal to the Valarjar are encountered for the first time in the Halls of Valor. Unlike the ones that were bound to servitude by the Lich King, the Val'kyr residing within these halls are pure beings that are warriors of the Light. They are tasked with bringing the souls of deceased Vrykul heroes from Stormheim and Northrend to these halls for eternal feasts.

The vrykul shieldmaidens of Skold-Ashil employ a rite of ascension to be granted access to a vault which provides an audience with Eyir. Sylvanas Windrunner made a deal with Helya and was granted a magical lantern called the Soulcage which Sylvanas intended to subjugate Eyir with and force her to make more Val'kyr for the Forsaken. Sylvanas had an adventurer undergo the rite of ascension to gain access to the vault in Skold-Ashil and used the Soulcage to bind Eyir. Genn Greymane followed Sylvanas into the vault, however, and foiled Windrunner's plan by smashing the lantern and freeing Eyir.

Val'kyr under Helya appear in Helheim during the Trial of Valor.

After the defeat of the Lich King, only nine of his Val'kyr remained. These nine bound themselves to Sylvanas and in order to seal the pact, the strongest Val'kyr Annhylde sacrificed herself to save the banshee's life. Later, in Silverpine, Agatha, Daschla, and Arthura sacrificed themselves to revive the Dark Lady once more after she was shot dead by Lord Godfrey.[16] In Andorhal, Aradne was killed by Alliance forces.[17]

At this point, though five Val'kyr died and thus only four should remain, the number of Val'kyr who appeared during the Battle for the Broken Shore cinematic was five.

In Darkshore, Brynja was killed by Tyrande Whisperwind.[18] The Val'kyr left alive are: Signe, Kyra, and one (or two, since there were five at the Broken Shore instead of four) other.

The Val'kyr are able to raise corpses into undeath, which is how more Forsaken are created. The power of the Lich King previously allowed them to raise more powerful undead in the form of death knights. They can still extremely rarely use their own powers to reshape the body of an active undead and make it stronger, though it is an arduous endeavor that they are reluctant to undertake. For this reason, Sylvanas cannot have all the Forsaken undergo the ritual, and the only known person to have done it is Nathanos Blightcaller.[19]

Multiple lesser Val'kyr maidens were spotted in the skies during the Battle for Andorhal, and though they can raise corpses[20] these lesser Val'kyr are not part of the original pact and are thus not strong enough to revive Sylvanas. How exactly they are created remains unknown, and where they dwell now is a mystery.[21]

The Lady of the Sword mentioned in