"The Valarjar" redirects here. For The emissary quest, see

“A valorous sacrifice! But it is not yet your time...”

The Valarjar ("warriors of the storm")[1] are an army of ascended vrykul who serve Keeper Odyn in the Halls of Valor. Chosen by Odyn, the strongest vrykul have their spirits lifted to the Halls by the Val'kyr where they fight eternal, shiny and gold.[2]

The Valarjar can be given either mighty, golden Stormforged bodies, or become Val'kyr themselves with power over life and death. This army was originally created as an equivalent to the Dragon Aspects, who Odyn judged unworthy for the task of protecting Azeroth, until the Val'kyr Helya cursed the Keeper and his army to be trapped within the Halls for ages. Despite this, the Valarjar fought alongside the other orders during the Burning Legion's third invasion of Azeroth. A section of the Halls, named Skyhold, served as their order hall. The spell that kept them imprisoned was lifted with Helya's recent death, freeing Odyn and his golden warriors for good. 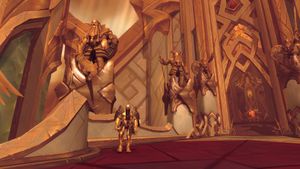 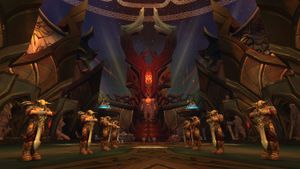 “In the clouds high above Stormheim, the titanic keeper Odyn has called the greatest vrykul warriors on Azeroth to be his Valarjar. Amidst feasting halls and hunting grounds, these ascended vrykul test themselves and prepare for the great war that is to come.”

— Adventure Guide entry for the Halls of Valor

Serving as Prime Designate over a relatively young Azeroth, the titan keeper Odyn often walked the world disguised as a variety of beings, in order to observe his charge. In particular, Odyn would be drawn to the mighty vrykul, who he admired for their courage and tenacity.[3] Much of the time Odyn would mingle among the vrykul. After witnessing their battle with the serpent Ysildar, Odyn became further sure of his view that they were a fearless race gifted with nobility and valor. When the Titan Pantheon chose to empower the Dragon Aspects as Azeroth's principal defenders, Odyn was angered by the decision; instead believing the vrykul to be a more worthy choice. 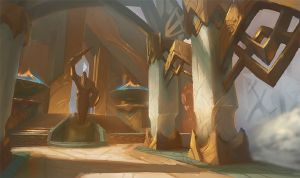 The Halls of Valor, home of the Valarjar

Despite Odyn's protests, the Dragon Aspects were given their duty. Odyn broke from his keeper brethren and decided to empower his own guardians in the form of the vrykul. The Titanic Watcher Helya raised a section of Ulduar into the skies, transforming it into a new seat of power known as the Halls of Valor, which he intended to populate with a new army of warriors. Odyn proclaimed to all vrykul that the most worthy individuals to fall in combat would be reborn as Valarjar and guardians of the world.

To deliver the spirits of his chosen dead from the Shadowlands, he sought to create winged harbingers known as Val'kyr, who would be capable of crossing the boundaries of life and death. Helya protested against the turning of her fellow titan-forged into Val'kyr and threatened to bring the Halls of Valor back down on Azeroth. Odyn turned on her and transformed her into the first of the Val'kyr. For ages, Helya and the other Val'kyr brought the souls of the valiant dead to the Halls of Valor, where they were trained by Odyn himself.

Though all had gone according to Odyn's design, Helya would forever resent her forced servitude. Eventually, at the urging of the corrupted Keeper Loken, she used her power to seal the Halls of Valor, preventing Odyn or the Valarjar from accessing the outside world. The imprisonment of the Valarjar within their own fortress would last for thousands of years, as Helya herself began to take charge of vrykul souls from her new realm of Helheim. 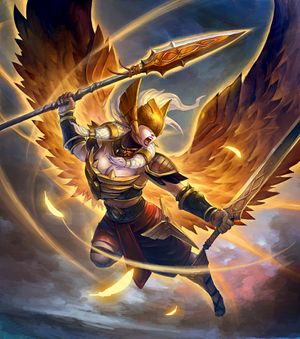 Though Odyn and the Valarjar remained largely confined to the Halls of Valor for millennia, many heroic vrykul souls chosen by Odyn continued to be collected by his Val'kyr and taken to the floating fortress. Odyn himself was also still able to roam the outside world as an observer, favoring a disguise as the sage Havi. Among the vrykul of the Broken Isles in particular, the legend of the Valarjar remained quite alive and widespread. Many sought a worthy death in combat to join Odyn's elite.

At the time of the Burning Legion's third invasion of Azeroth, Odyn and the Valarjar remained locked within the Halls of Valor, which orbited high above the land. Odyn would take interest in the arrival of mortal forces to battle the demons', observing their initial setback on the Broken Shore. Later, he would pick a specific mortal warrior to act as his new champion, granting them overall command of the Valarjar themselves.[4] This warrior, who became known as the Battlelord, was saved from death while fighting the Legion, and though taken to the Halls of Valor at Odyn's behest, were freely able to leave the complex at will.

Eager to join in the war against the demonic invaders, Odyn would use the Battlelord as his tool in directing the Valarjar. An area of the Halls known as Skyhold became an order hall for the many mortal warriors involved in the war, and the resources of the Valarjar were once more used against the enemies of Azeroth. Odyn would also aid the Battlelord in acquiring one of the most powerful weapons in existence to better fight the Legion. Using the Eye of Odyn to see events across the Broken Isles and beyond, the Valarjar now began to wage a limited war against the Burning Legion, striking in key areas. At the same time, the Battlelord continued their own campaign.[5]

Though Odyn influenced events in Stormheim when it was attacked by the Felskorn and demons, the Valarjar were unable to play an active role. However, mortal heroes would eventually travel into the Halls of Valor itself to pursue God-King Skovald and the Aegis of Aggramar. There, Odyn determined to test these champions and set the Valarjar and other denizens of the Halls to besting them. The mortals would succeed in facing down all the challenges the Valarjar could pose, confronting and defeating both the God-King and Odyn himself, and thus securing the Aegis.[6]

Later, Odyn would discover that Helya had developed a way of turning even the souls of Stormforged Valarjar into her twisted kvaldir. Outraged, he would rally a force of champions and, having tested them himself personally, he sent them into Helheim with the goal of vanquishing Helya. They would battle through waves of the Sea-Witch's minions, before confronting her. After a desperate fight, they were successful in killing Helya, and in doing so freed Odyn and the Valarjar from their millennia-long containment.[7]

After finally slaying Helya, the Valarjar would also recover her horn, capable of commanding the legions of kvaldir. Though unredeemable, Odyn hoped to put the kvaldir to good use, and had the Battlelord use the horn to direct them against key Legion targets around the Broken Isles.[8] 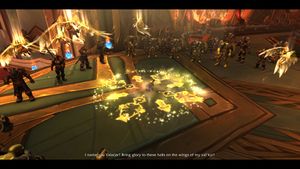 Over time, more preparations were made to ready the Valarjar for the coming war. The Battlelord would recruit Captain Hjalmar Stahlstrom to oversee the training of new Aspirants,[9] while Einar the Runecaster was brought on board to expand the powers of Skyhold.[10] With these advancements, the Valarjar would become significantly more disciplined and organized, taking on the form of a truly formidable army.[11]

To further strengthen their forces, a plan was made to unite the titanforged Keepers of Ulduar from ancient times. To accomplish this, the Battlelord departed on a quest to recover the Gjallarhorn, capable of summoning the Keepers. With the aid of Hymdall, the artifact was tacked to the great worm Jorhuttam in Highmountain. The Valarjar marched on Highmountain Summit seeking the beast, and would ultimately vanquish it in a fierce battle.

Before the Gjallarhorn was used, however, the Valarjar first continued to bolster the position in the fight against the Legion. In doing so, they gained the aid of the Valkyra in the form of Savyn Valorborn. The Val'kyr would now rally the most worthy shieldmaidens in Odyn's name, adding greatly to the armies of Skyhold. At this time, Odyn would also turn his attention once more to Helya, dispatching the Battlelord into the Maw of Souls to confront the Sea-Witch. Though she would survive the battle, Helya suffered a significant defeat at the hands of the Valarjar.

Now content with their position, Odyn and the Valarjar used the Gjallarhorn to summon Ulduar's keepers. However, they were to discover that the titanic fortress had been overrun by the Burning Legion, with Thorim and his fellow guardians unable to leave. The Battlelord departed immediately with Valarjar in tow for Ulduar and cut their way through the demonic invaders to reach the keepers. Both Thorim and Hodir would be rescued from the demons, though the latter ended up getting trapped through one of the invaders' portals to the world of Niskara. After returning to Skyhold, Thorim pledged himself and the forces of Ulduar to the Valarjar, who now devised a plan to save Hodir.

With their armies prepared, the Valarjar launched an attack on the demonic gateway at Felblaze Ingress, seeking to appropriate the portal to reach Niskara. Hymdall then opened the portal, allowing a large force led by the Battlelord to push into the demon world. As the other Valarjar battled the Legion across the ruined plane, Thorim and the Battlelord located Hodir and slew his captor Lady Ran'zara, freeing him from demonic influence. 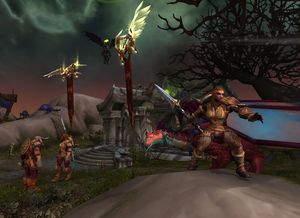 Valarjar forces on the Broken Shore

Having achieved victory on Niskara, the Valarjar returned to Skyhold and were greeted by Odyn. Hodir would also pledge himself to the war against the demons, and Odyn rewarded his Battlelord with every more power for their artifact weapon. The Valarjar themselves would meanwhile continue the fight against the Legion alongside the Azeroth's other orders.

The war against the Burning Legion eventually began to see some success, and the demons responded by opening a massive new offensive on the Broken Shore surrounding the Tomb of Sargeras. Representing the Valarjar, Odyn, as Havi, attended a meeting in Dalaran with the other orders, where they planned their next move. All would watch as the demon lord Kil'jaeden launched his new attack from the Tomb.

A new faction was subsequently formed when the order halls united into the Armies of Legionfall. These orders now pooled their forces and waged war as one on the Broken Shore, based from Deliverance Point. The Valarjar themselves would also establish an outpost at Aalgen Point closer to the Tomb of Sargeras. Odyn and the Valarjar personally dealt with a remnant Felskorn presence at Felrage Strand.[12]

A token Valarjar presence would also be sent to the Vindicaar during the Argus Campaign, which the Battlelord would play a major role in.

The following fought as part of the Valarjar during the war on the Broken Isles, but are not members of the faction.

These are the chosen warriors of Odyn, sworn to his service in life and death.