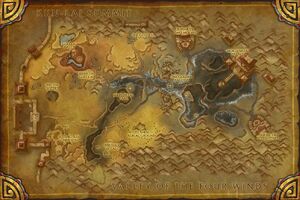 The Vale of Eternal Blossoms storyline begins at level 87 in Kun-Lai Summit at the Temple of the White Tiger. A short quest chain pays off with the opening of the Gate of the August Celestials for the first time in generations! After that, breadcrumbs open up to daily quests elsewhere on the continent once adventurers reach level 90.

The actual storyline plays out whenever players gain a reputation level with the Golden Lotus faction. Daily quests for the Golden Lotus start at the Golden Pagoda underneath the two mogu statues on the east side of the zone. 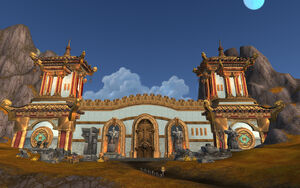 Gate of the August Celestials

[87] Temple of the White Tiger 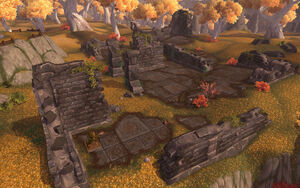 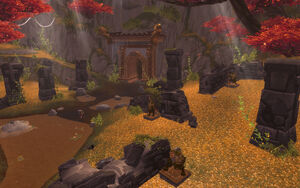 The subject of this section was removed from World of Warcraft in patch 5.4.0.

At a new reputation level with the Golden Lotus, a new quest in the chain is offered:

Dailies with the Golden Lotus faction begin at the Golden Pagoda. After completing the first four quests there, Leven will send players afield in the zone to do other tasks for the faction.

Breadcrumbs to various newly-available quest hubs are offered in the basements of the capital cities, most of which lead to daily quests requiring level 90.