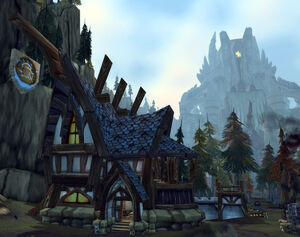 Valgarde - Utgarde Keep can be seen looming in the background. 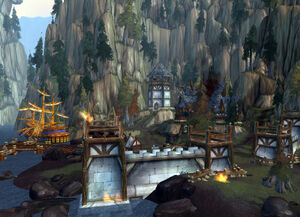 Dock for arrival in Valgarde in WotLK Beta. 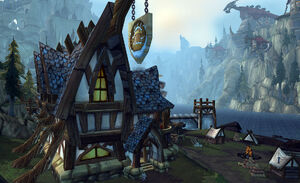 Valgarde is an Alliance port settlement in Northrend. It is one of the two Alliance entrances to the continent the other being Valiance Keep.

It is periodically attacked by a group of Dragonflayer vrykul and their worgs, and by proto-dragon riders raining fire from the sky.

Vice Admiral Keller says that "We'd been here a month when those malformed giants appeared out of thin air." [2]

Valgarde is the only established Alliance settlement in Northrend and it is the obvious arrival point for anyone traveling to this continent.[3] The town is led by Magistrate Randalvarr[4] and a ruling council.[5]

Located in the Howling Fjord, Valgarde is a rough seaport where you can find all races, occupations, and characters floating through here. It is an excellent place to find information about Northrend in general, and to hire guides or buy equipment before setting out. It is also the only place in the continent where you can hire passage off this ice-coated land, back to warmer and more civilized continents. Of course, Drakkari trolls, furbolgs and occasional monsters attack the town frequently, but its strong walls never fail and the watchtowers provide ample warning.[3]

Most people who arrive in the town purchase low, fur-lined caps with flaps for the ears, or headbands that slant down in back, or thick hoods, anything to keep their ears from ringing when outside. Small farms dot the landscape of the Fjord, particularly near Valgarde. Thanks to this city, humans dominate the region and the majority of people live here except for farmers, hunters or trappers.[3]

Valgarde was founded by the humans and dwarves of Arthas Menethil's expedition to Northrend after the prince disappeared when he went to search for Frostmourne. Stranded in this frozen continent and without the ships to return to Lordaeron, which had been burned by Prince Arthas, the humans and dwarves built the town and some fortifications around it to protect it. As Valgarde grew, its residents forced the Drakkari and furbolgs back into the Grizzly Hills and beyond, making the region safe enough for brave farmers to till the land.[3][6]

The remaining dwarves from Muradin's expedition hid within ruins or gathered with humans in Valgarde.[7]

Valgarde appears to be similar to a Viking town from the concept art, this would make sense due to the fact Northrend's climate is similar to northern Scandinavia. It is most likely a reference to the Swedish town of Valsgärde, the site of a large number of Viking archaeological sites dating from the 6th - 8th centuries.

The exact location of Arthas' original landing zone seems to have undergone a retcon from Warcraft III to World of Warcraft. In Warcraft III, it is on the border of Daggercap Bay, which lies in the Howling Fjord. Arthas: Rise of the Lich King keeps this view. In World of Warcraft however, it has been moved to the southeastern Dragonblight, at the Forgotten Shore. Due to the presence of Baelgun's Excavation Site in the Fjord, it is probable that the original concept for Valgarde in World of Warcraft was still meant to be Arthas' original landing zone but that it was eventually retconned so that the questlines of the Forgotten Shore could happen. It is also possible that at some point Westguard Keep was Muradin Bronzebeard's base and that the Forgotten Shore was the former Scourge base that Arthas took over for at least two missions.