Not to be confused with Halls of Valor, Valhallas, or Hallvalor. 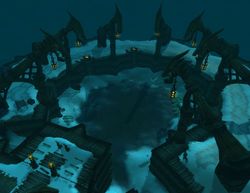 is a battle pit at the northern end of Jotunheim in northwest Icecrown.The fights are being overseen by Geirrvif and Gjonner the Merciless. It is the place where the Vrykul prefer to do their honorable combat, to become ascended.[1] After the death of Overthane Balargarde by the hand of the player,[2] they are invited to participate in the Battle at Valhalas. However the player will not become ascended, the player must prove that they are worthy of fighting in this sacred place, much to the dislike of Gjonner.

Ayala the Relentless cut down foe after foe in the pit on his way to legend. Becoming more lethal as his opponents weakened, he was truly terrifying to spectate.[3]

This arena has a very similar name with the Halls of Valor in the Vrykul language, where the worthy souls of the fallen vrykul go after death.