The Valiance Expedition was the main army of the Alliance in Northrend, moving against the Scourge and unified under King Varian Wrynn's command. Forces on the front lines were under the command of Highlord Bolvar Fordragon. These allied forces were also represented in the battlegrounds located on the Strand of the Ancients and Isle of Conquest, where they waged war against the Warsong Offensive. The Expedition joined forces with other allied forces that had established themselves throughout Northrend, thereby uniting into the Alliance Vanguard.

Valiance Keep is the the headquarters of the main armies of the Alliance in Northrend under the personal command of King Varian Wrynn. General Arlos commands the keep itself. It is is one of the two primary ports of entry for the Alliance in Northrend, the other being Valgarde. The headquarters is besieged from outside the walls by the Scourge's nerubian armies, and from within the Cult of the Damned and the San'layn attempt to undermine the Alliance command structure.

They fought the Warsong Offensive for the titan database in the Strand of the Ancients. 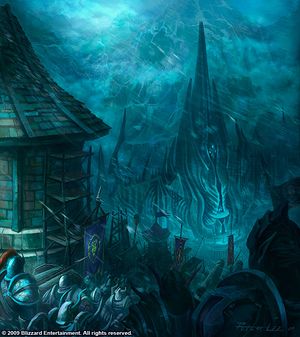 High Commander Halford Wyrmbane led the Alliance forces in the region from Wintergarde Keep. The keep serves as the headquarters for the 7th Legion. It's under siege by the Scourge forces that had taken surrounding village, while Naxxramas hovers in the skies outside. The Expedition defeated Thel'zan the Duskbringer, formerly the treacherous priest Inigo Montoy, who was given the phylactery of Kel'Thuzad which — as it was not destroyed — allowed the Archlich to regain corporeal form. Without problem, they made contact with the local tuskarr.

From Westfall Brigade Encampment, the Alliance must fight the vrykul, Wolf Cult and the Venture Company. Captain Gryan Stoutmantle and People's Militia from Westfall lead the encampment. Brugar Stoneshear of the Explorer's League is researching Thor Modan.

High Commander Halford Wyrmbane led a vast army to claim the island for its resources.

When the Alliance led by Bolvar Fordragon attacked the main entrance of Icecrown, the Horde forces led by Dranosh Saurfang came to assist them. The Lich King took the life of Dranosh, and the betrayal Grand Apothecary Putress put an end to the offensive, killing most of the attackers. Bolvar was presumed deceased.

From The Skybreaker, the Alliance under the order of High Captain Justin Bartlett tried to take Ymirheim, a vrykul village, and to eradicate the Scourge troops in the valley before discord with the Horde.

During the fights in the Northrend, a lot of warriors of the Alliance had been imprisoned as slaves into the Pit of Saron. The Valiance forces succeed in saving Jaina Proudmoore and her troops when she escapes from the Halls of Reflection.

They fight in Icecrown Citadel against the Scourge and the Horde on the Rampart of Skulls. They help the Alliance adventurers in Light's Hammer. When Muradin Bronzebeard hears the scream of Bolvar Fordragon, he led the Valiance forces on the Skybreaker to attempt to save him. However, they fall upon the Orgrim's Hammer in the sky.

The Valiance Expedition has established several sizable outposts throughout the continent. The primary base of operations is however located on the shores of Borean Tundra.

The main armies of the Alliance in Northrend, moving against the Scourge and unified under King Varian Wrynn's command.