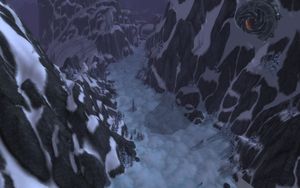 The Valley of Ancient Winters is located in the central reaches of the Storm Peaks, connecting Brunnhildar Village to the east, with Dun Niffelem to the west. It is the site of a war between the Brunnhildar Hyldnir and the Sons of Hodir.

It is inhabited by frost giants and their frostworgs, the former of which is being attacked by bear riders from Brunnhildar Village.

The Hibernal Cavern is on the northern wall of the valley.

Initially, Hyldnir on war bears roam the area, attacking (and being attacked by) the frost giants and their frostworgs.

After the character completes

[80] The Drakkensryd quest (part of the Sons of Hodir quest chain), the Hyldnir retreat back to Brunnhildar Village, leaving the valley to the frost giants, the frostworgs, the mammoths, and the Jormungar.