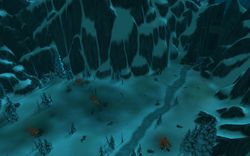 The Valley of Echoes

is usually the first area players will visit in their journey into Icecrown. Located on the Southeastern most area, it can be entered through a naturally forming ramp from Crystalsong Forest or through flight. The Argent Vanguard can be found here.

[78] A Cold Front Approaches, the Scourge will start attacking on the Argent Vanguard.

Cannons appear on top of the Argent Vanguard Towers. The Valley is filled with scourge of various sorts, and an occasional Frostbrood Destroyer joins the fight.

[78] The Last Line Of Defense is completed the Argent Crusaders once again wander the Valley of Echoes cheering loudly near the dead bodies of the slain Frostbrood Destroyers and various dead Nerubians.

Various NPCs appear at (or move from the Argent Vanguard) a camp at the north end of the Valley of Echoes, just shy of The Breach. While a small group of crusaders guard the Breach from further Scourge invasions.