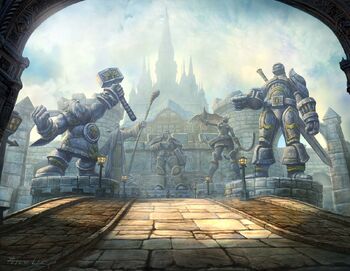 The Valley of Heroes as depicted in the TCG. 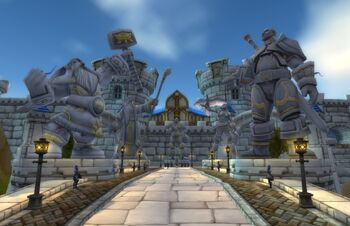 The Valley of Heroes in World of Warcraft.

The Valley of Heroes is a valley that lies before Stormwind Gate. A bridge of stone crosses the narrow moat and is the first sight of all who enter. This gloriously lush valley lies south of the city, and many visitors must pass through it, as it is one of three entrances to Stormwind (the others are the Deeprun Tram, and the Stormwind Harbor). The statues of five famous Alliance heroes stand on either side of the path, welcoming visitors while providing an awe-inspiring warning.

The valley is also the location of several important Stormwind officials. Astride his tall stallion in the center of the causeway is General Hammond Clay. Down the left fork of the bridge is the paladin, Major Mattingly, and down to the right stands Field Marshal Afrasiabi.

After the Second War and during the reconstruction of Stormwind, five statues were built in this valley to commemorate the sacrifice of the Alliance Expedition members during their campaign on the orcish homeworld of Draenor. These heroes comprised the leadership of the expedition that traveled through the Dark Portal to seal the dimensional rift from the other side. On the left are Kurdran Wildhammer, Thane of Aerie Peak, and the Archmage Khadgar of the Kirin Tor; on the right are Force Commander Danath Trollbane and Ranger-Captain Alleria Windrunner; at the end of the main road, just before it splits to enter Stormwind City proper, is General Turalyon, the expedition's military leader.

A few years after the construction of the monuments, Alleria and Turalyon's son Arator was present at a ceremony in the Valley of Heroes, sitting on the shoulders of a Knight of the Silver Hand and looking up at the statue of his mother, a face he couldn't remember. Alleria was observing this from aboard the Xenedar, the vessel of the Army of the Light, and sent her feelings to Arator through the Light. When he received her emotions, the young Arator looked around, smiled, and then reached out to her statue. He would return again and again to the Valley of Heroes to see her face, knowing she would always love him.[1] 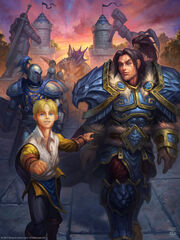 It was here where Onyxia's head was displayed after King Varian Wrynn had returned to Stormwind from his quest.

During the Elemental Unrest, to advocate the beliefs of the Twilight's Hammer in public, Doomsday Messages were placed in certain areas in Stormwind, including the Valley of Heroes, by Alliance adventurers who had infiltrated the cult.[2]

During the Cataclysm, Danath's statue was toppled by Deathwing, who also damaged the two towers overlooking the valley, leaving fiery claw marks on them. The dragon's immense weight also caused severe damage to the tower foundations.[3] Construction workers led by Foreman Wick and Mason Goldgild began trying to get Danath's statue back in place, but the work went slowly due to disagreements between the two foremen.[4][5] During a Remembrance Day celebration, the traditional Honor Ceremony took place in the shadow of the valley's statues.[3]

After the Cataclysm and turning over his seat on the Council of Three Hammers to Falstad, Kurdran Wildhammer stated that he would go to Stormwind to meet King Varian and to see his statue. By the time of the invasion of Pandaria, he was the first of the five Alliance Expedition leaders to have visited the valley.[6]

With the death of General Marcus Jonathan—who patrolled the valley—in the Attack on Theramore Isle,[7] the valley's guards were put under the command of General Hammond Clay.

Despite the bickering between Foreman Wick and Mason Goldgild, the city's workers eventually finished repairing all of the damages to the valley during the events of the invasion on Pandaria.

During The Unseen Blade.

Khadgar might have seen his statue when he flew to Stormwind Keep to warn the Alliance that the Burning Legion had returned (if he had not seen it before), but he may well have been too preoccupied to be concerned with such things. Alleria and Turalyon saw theirs after the imprisonment of Sargeras at the end of the third invasion of the Burning Legion and their return from Argus. They both felt unsettled by their monuments.[1] Turalyon also thought that his statue's nose had been botched.[8]

After the downfall of N'Zoth, Turalyon found Alleria in the valley reflecting about "simpler times".

Renowned Dragon Fighter. Gryphon Master of the Aerie Peak. Commander of the Gryphon Rider Division attached to the Alliance Expedition that marched into the orc homeworld of Draenor. Presumed deceased.

We will hear Sky-Ree's calls upon the winds. We will hear your hammer thunder across the mountaintops. Ride hard into the hereafter, brother. The halls of our ancestors await you.

Archmage Khadgar of the Kirin Tor

Former apprentice of Medivh. Supreme Commander of the Alliance Expedition that marched into the orc homeworld of Draenor. Presumed deceased.

Never did one so selflessly delve into the dark heart of magic and warfare. We wish you well, bold wanderer. Wherever you are.

Former Lieutenant to Lord Anduin Lothar. Knight of the Silver Hand. High General of the Alliance Expedition that marched into the orc homeworld of Draenor. Presumed deceased.

Esarus thar no'Darador' - By Blood and Honor We Serve.
You were the right hand of justice and virtue, old friend. Your name will be honored in our halls always.

- Lord Uther the Lightbringer - Knight of the Silver Hand

Militia Commander of Stromgarde. Tactical Advisor to General Turalyon, Force Commander of the Alliance Expedition that marched into the orc homeworld of Draenor. Presumed deceased.

We honor your memory, nephew, and your sacrifice. Since the founding of our glorious empire, the path to valor has always been drenched with the blood of heroes.

Renowned Troll Hunter of Quel'Thalas. Lead Scout and Intelligence Agent for the Alliance Expedition that marched into the orc homeworld of Draenor.

The Valley of Heroes in Shadows & Light.

This gloriously lush valley lies south of the city, and all visitors must pass through it, as it is the only entrance to Stormwind. Statues of heroes such as Danath Trollbane, Alleria Windrunner and High General Turalyon stand on either side of the road, welcoming visitors while providing an awe-inspiring warning.[9]

While on a diplomatic visit to Stormwind, Akinos Steelclaw discussed the heroes of the valley with Cristof Dungalion and another member of the Stormwind City Guard.[10]

Valley of Heroes-inspired area in Overwatch.