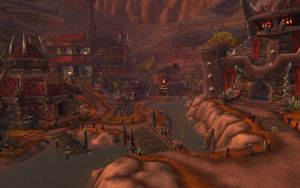 The Valley of Honor in Cataclysm. 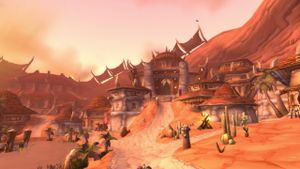 Valley of Honor in Classic. 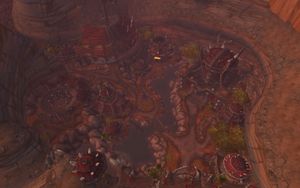 The Valley of Honor seen from above.

is the location for all things having to do with warfare in Orgrimmar. The valley is home to both warrior and hunter trainers, various arms and armor vendors, and the Horde battlemasters. The Ring of Valor arena is located here. The Hall of the Brave houses the warrior guild, as well as all the city's battlemasters. Blacksmithing, mining, and fishing trainers and vendors are found in the valley.

During the second Scourge Invasion, the valley was invaded by the Scourge. It was defended by Horde champions and leaders.

The Cataclysm has caused the land to shift in the valley. This shifting has destroyed the once secluded pool of water and form a larger lake that flows throughout the valley.[citation needed]  The orcs have blown through the northern section of the valley to create an entrance to Azshara.

The valley has subsequently become home to several of the Horde's newer member races: Ji Firepaw and the Huojin Pandaren set up camp in the middle of the valley, Overlord Geya'rah and the Mag'har later claimed the Hall of the Brave as their own, and finally, the vulpera set up camp near the southwestern wall dividing the valley from the Drag.

Near the entrance to the Drag

Near the Azshara gate