The Valley of Trials in southern Durotar is where all young orcish adventurers begin their journey. Within the valley, they take on challenges that enable them to get used to their new status as recruits of the Horde. By the time they leave the valley, they are more than ready to face the trials that await beyond the tall walls.

What was once a small network of natural caves in the cliffs to the north has recently been inhabited by foul demons of the Burning Blade. Even though the demons there are relatively weak and harmless, they have begun to spill out into the valley proper. Furthermore, the presence of the demons suggests that rumors about the Shadow Council getting a foothold in the region may have some truth.

Around the time of the Cataclysm, Alliance forces of the Northwatch Expeditionary Unit also started sending scouts into the area. The trolls of the Darkspear tribe also packed up and left for the newly-freed Echo Isles.

Wildlife in the area includes venomous scorpids and brutish boars. While most of them are fairly harmless, a particularly nasty scorpid called Sarkoth has been causing trouble. Orcish peons also utilize the area gathering lumber from what few trees grow in the arid landscape.

The whole valley seen from the air.

A small cave carved out of the cliff, roughly in the center of the valley, is equipped with the basic comforts of living and is known as The Den. This is where recruiters and trainers live and work, and where the new recruits report back as they complete tasks in the area. Recently, a taint has crept into the northern part of the valley. What was once a small network of natural caves in the cliffs has recently been inhabited by foul demons. 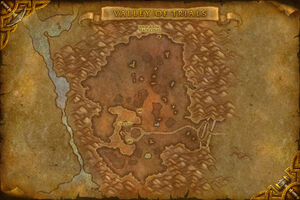 Map of the Valley of Trials.

Please add any available information to this section.
The Den is guarded by a group of grunts. There are butchers and armorers. Furthermore, there are quite a few trainers who train the young orc recruits. Recently a pandaren monk traveled there to train the orcs the Way of the Monk.

The Valley of Trials had some changes since Cataclysm:

The Valley of Trials is where new arrivals are tested by being put through several rites of passage. From the simple, thinning out the boar population, to the daunting, killing the summoned creatures of the Burning Blade. Any young orc finds the Valley of Trials to be a perfect place to cut their tusks.[1]