Valormok is an orc-controlled Horde outpost in Azshara. It was originally found to the northwest, north of the Haldarr Encampment. In Cataclysm the area was moved to the southwest. The original location was fairly unprotected and bare, as the Horde had initial little interest in this hostile territory, though the new outpost was reinforced by the time of the return of Deathwing. 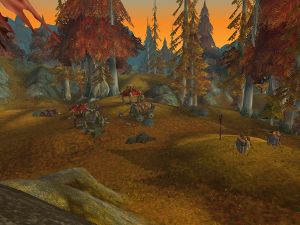 Valormok, as found in Classic

Old Valormok was a small outpost found in northwestern Azshara. The warriors there experienced difficult times but were still hopeful. It was populated with many more orcs, but most were slain by the treacherous blood elf Magus Rimtori, who was sent with warriors by Belgrom Rockmaul to find riches and powerful artifacts. Instead, Rimtori ended up killing the Horde warriors and taking what she found for herself.[1] The leader of the camp, Ag'tor Bloodfist, sent adventurers out to avenge both his warriors and Rockmaul's pride. They made war upon the nearby Thalassian Base Camp, slaughtering the elves there[2] and eventually killing Magus Rimtori.[3] Jediga was also sent here by Rockmaul as a punishment, though she made the most of this by instructing adventurers to try and find ancient Highborne tablets to sell to interested parties in the area to get out of Azshara.[4]

By the time of the return of Deathwing, the outpost had been moved far to the south, built among ancient Highborne ruins. Most of Valormok's original inhabitants are gone, having returned to Orgrimmar or accompanied Ag'tor to the new rear gate of Orgrimmar, to the point the only original inhabitant is Kroum. Chawg appears to have taken command of the camp in Ag'tor's absence and makes use of their new goblin allies. The new camp hosts several barricades, a goblin bomb wagon, and a new fire pit, as well as a legion of grunts to defend it.

The Horde has plans to invade Ashenvale and the only way to gain support from Orgrimmar is to clear a path through Azshara, seeing that the only way to do this is to drive out the night elves of Talrendis Point by bombarding the towers on their wyverns and eliminate the resistance. This of course didn't go unnoticed and the night elves retaliated on Valormok.

During Legion Invasions, Valormok was defended by its residents.

After the Fourth War, when Thrall, Baine Bloodhoof, and Calia Menethil flew from Orgrimmar to Valormok on wyverns. Once they arrived here, they changed their mounts to hippogryphs and continued to Nordrassil.[5]

Camp Valormok is a small encampment with a population of 250. Is the staging point for most of the Horde forces in the area, and it consists of little more than a gathering of a few tents and crude walls. Still, it is better than the Alliance holdings, who have nothing more than a landing pad, and a couple of night elves standing around here and there.[6]