Valorn Stillbough is a night elf and part of the expeditionary force in Gilneas.

Valorn brought the Scythe of Elune to Belysra Starbreeze mere days after it was found in Duskwood[2] by Revil Kost. Brink Spannercrank said he was going to deliver it to a night elf,[3] most likely meaning Valorn.

Valorn gained access to Gilneas through a set of dirt tunnels running beneath the Greymane Wall, which was the last piece of the puzzle Halford Ramsey needed to realize the Wolf Cult and Forsaken were working together. Valorn then aided Belysra during the battle against the Alpha Prime and the Forsaken.[2] 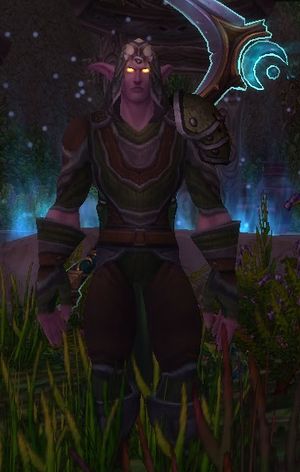 Valorn with the Scythe of Elune in Duskwood.

After the events in Gilneas, Belysra and Valorn traveled with the Scythe of Elune to Duskwood to further their studies of the worgen.[4] On orders from Tyrande Whisperwind they brought it to the Twilight Grove in Duskwood to give it to a druid adventurer traveling from the Dreamgrove, though Valorn thought it was a bad idea. However, Valorn was assassinated by Ariden and the Scythe stolen, putting it in the hands of the Dark Riders who had coveted it for so long. As the druid began pursuing Ariden, Belysra stayed behind to mourn Valorn.[5]

Main article: The Scythe of Elune#Notes

He may be related to Sentinel Stillbough.