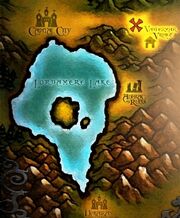 Vandermar Village was a Lordaeron village situated northeast of Lordamere Lake near Capital City. It was a large settlement, with its own cathedral, cemetery and military garrison.

During the Third War, many acolytes of the Cult of the Damned lived in hiding in Vandermar Village. The village was safe from aggressors (save for a handful of bandits) and for a long period of time, Vandermar Village remained unscathed while the Scourge rampaged through Lordaeron.

After returning from Northrend and succeeding his father through regicide, Arthas Menethil was summoned by Tichondrius to the outskirts of Vandermar Village. Tichondrius instructed Arthas to rally the acolytes of the Cult of the Damned in order to reanimate Kel'Thuzad. The local town guard had begin suspecting the acolytes and chasing them, but Arthas gathered the cultists and saved those in danger, destroying the village in the process. During his battles with Vandermar's garrison of soldiers, Arthas bolstered his forces by reanimating the dead bodies recently laid to rest in the local cemetery.[1]

Vandermar village is not present in World of Warcraft in any identifiable form. Given its relative position on Warcraft III maps, it is likely to be either in the eastern area of the Tirisfal Glades, the northern area of the Alterac Mountains, or in a portion of the Western Plaguelands west of Andorhal. In another version of the Warcraft III map seen in the printed manual but not the game itself (where Brill is south of Andorhal), Brill is in the exact same location as Vandermar Village.

Locations of a few settlements in Warcraft III, such as Brill, are known to differ significantly from their positions in World of Warcraft, so it is possible that this village is located elsewhere. Considering those changes, it could be presumed that it is Deathknell, the Forsaken starting area, or it may have been destroyed entirely by the Scourge or the Burning Legion.