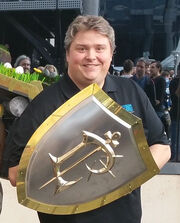 Vaneras (real name Bo Selmer Hansen) is a Blizzard employee and one of the English language Online Community Representatives for a number of Blizzard games, including World of Warcraft, Diablo III and Overwatch, specifically posting in the EU forums. Vaneras is from Denmark.

Vaneras has earned some notoriety amongst the EU warlock community for his comment in a 'Nerf warlocks' thread, "Every time you post a nerf warlocks thread, we buff warlocks more!"[1]