This article is about Vanessa's character biography. For the character's appearance and fight strategies in the Deadmines instance, see Vanessa VanCleef (tactics).

“Hope is a cruel joke, played upon us by a harsh and uncaring world. There is no Hope, there is only Vanessa.”

— Hope Saldean, revealing herself to be Vanessa VanCleef

Vanessa VanCleef is the daughter of Edwin VanCleef and his successor as head of the Defias Brotherhood.

It is revealed in a flashback that Vanessa was present when Edwin VanCleef was killed and decapitated by forces of the Alliance onboard his juggernaught in the Deadmines. After her father's death, Vanessa was adopted by the Saldeans, who were unaware of her identity. They named her Hope and parented her while they watched her grow up over the years. Her identity as Hope Saldean worked to her advantage as she secretly became her father's successor as the leader of the Defias Brotherhood.

Unlike her father, she is not especially skilled in close combat. However, she has very impressive skills in making poisons, especially ones that cause hallucinations or insanity. 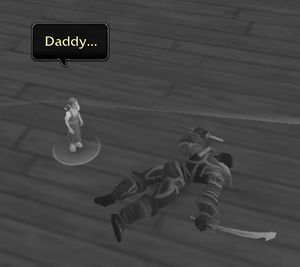 Little is known about Vanessa VanCleef's early childhood except that she was the daughter of Edwin VanCleef, leader of the Defias Brotherhood and ruler of the Deadmines. Apparently the only people who knew about her birth were Theodore and Verna Furlbrow, having seen her as an infant.[1] Approximately five years prior to Deathwing's return, she watched from the shadows as her father was defeated by a group of adventurers on the orders of Gryan Stoutmantle.[2] According to Salma Saldean, "in the dead of night, a little girl walked right into our farmhouse and collapsed on the floor. Nobody had a clue as to her identity. The poor thing had no recollection of who she was or where she came from - truly a lost soul." The Saldeans adopted her and named her Hope due to the hard times that had fallen on them. At some point Hope started caring for the poor and destitute and ended up at Sentinel Hill.[3]

However, she secretly began plotting the resurrection of the Brotherhood. Having learned or known that the Furlbrows recognized her face from when she was a baby, Vanessa arranged their deaths to prevent any possibility of the couple prematurely identifying her, something she considered regrettable but necessary for her plans.[4] Soliciting the help of such unsavory characters as the ogre Glubtok[5] and the goblin Helix Gearbreaker, she used gnoll attacks to distract the forces of Sentinel Hill so the Defias could rescue the worgen Admiral Ripsnarl from his imprisonment there. When the gnolls proved ineffective, she resorted to anti-Stormwind propaganda, targeting the homeless masses in Westfall.[6] Vanessa personally delivered a rousing speech to the masses in Moonbrook, denouncing King Varian Wrynn among others and the toll the war in Northrend had taken on the people of Westfall.[7]

The investigations of Lieutenant Horatio Laine into a murder at Furlbrow's Pumpkin Farm led to incremental revelations about Vanessa VanCleef's dealings, disguised as a "Shadowy Figure".[8] Once her forces were sufficiently bolstered, she revealed herself to Marshal Gryan Stoutmantle as the newly reconstituted Defias Brotherhood mounted a surprise attack on Sentinel Hill. Stoutmantle, Laine and the other leaders were tied up and forced to watch as the Defias burned Sentinel Hill virtually to the ground.[9]

The forces of Stormwind then attacked the Deadmines and defeated Vanessa.

Vanessa had easily faked her death in the Deadmines because her opponents' minds had been affected by her neurotoxin. After an adventurer is made one of the leaders of The Uncrowned in the Hall of Shadows and Jorach Ravenholdt proposes a toast, Vanessa attacks with poisoned brew that incapacitates the rogues. Vanessa had planned on taking that final spot on the Uncrowned's council, and challenges the adventurer to a battle to claim it. After losing, Vanessa is told she can become the adventurer's agent or be executed, and Vanessa chooses to stay alive. Afterwards, Lord Ravenholdt tells Vanessa that her father would have been disappointed in her for her actions.

Vanessa participated in the Battle for the Exodar battling against High General Rakeesh, along with Garona Halforcen.

Vanessa appears in disguise as a Shadowy Figure during some of these quests.

Vanessa in Hall of Shadows.

"Lies, greed, and deception—these are the things that my father stood against. For years, he worked tirelessly, helping to rebuild your devastated city, and what thanks did he or anyone else get for it? Nothing. What choice did they have but to turn on those who the crown favored to get payment, one way or another? Fate, it would seem, has led me down this path. Even with the murder of my father, your foolish attempts to destroy the Defias have been in vain. I am, now more than ever, my father’s daughter, and the Defias Brotherhood will rise once more..."[11]