Not to be confused with Vann.

Vanndar Stormpike is a level ?? elite boss dwarf and the leader of the Stormpike Expedition in Alterac Valley. Vanndar rules from his fortress of Dun Baldar in the northern part of the Valley. As indicated by his abilities, he is a mountain king.

Vanndar Stormpike seeks to find artifacts that may reveal more about the heritage of his people. His pursuit to find artifacts leads into the sacred land where the Frostwolf clan dwell, causing conflict between the two.

Following the Cataclysm and the threats on Gilneas, Vanndar Stormpike has formed an alliance with Ivar Bloodfang's pack, the Bloodfang worgen, and has set up base on Purgation Isle.

When an Alliance player reaches Prestige Rank 2, Vanndar can be found in Stormwind Keep alongside other notable leaders of the Alliance. During 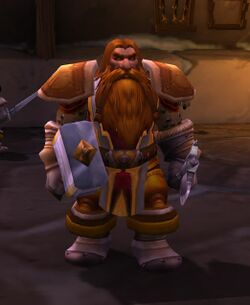 I promise you this much: The Valley will be ours.

Aggro
Soldiers of Stormpike, your General is under attack! I require aid! Come! Come! Slay these mangy Frostwolf dogs.

Assist
Take no prisoners! Drive these heathens from our lands! (Alliance players receive 10/20/30% damage/size increases, gained by turning in