Vanthir is a prominent resident and former resistance fighter in the nightborne city of Suramar. A tavern owner by trade, Vanthir would rise to particular importance during the Nightfallen rebellion, during which he acted as a major rebel leader within the city.

Throughout the civil war, Vanthir operated the city's Nightfallen base of operations from the Waning Crescent tavern, and also oversaw the distribution of arcwine to the starved populace. Many nightborne would come to depend upon his humanitarian efforts.

As the conflict began to shift in the rebels' favor, Grand Magistrix Elisande responded by ordering the destruction of the Waning Crescent and its inhabitants. In the ensuing massacre, many civilians were killed and Vanthir himself was taken prisoner, though he was later saved by Nightfallen agents. Vanthir would ultimately survive the rebellion, which saw the Nightfallen victorious. Not long afterwards, he would also be alive to witness the entry of Suramar into the Horde. 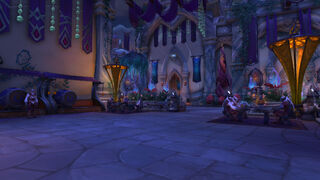 The Waning Crescent in Suramar City

Before the Nightfallen rebellion and the arrival of the Burning Legion, Vanthir worked as the proprietor of The Waning Crescent tavern near Suramar's Evermoon Commons. As a merchant, he also possessed supply contacts across the city, mainly for arcwine, specifically in the area of the Evermoon Terrace.[1] When not working, Vanthir would enjoy relaxing at a particular corner of the Shimmershade Garden, often reading or napping. He also favored a small eatery just outside the Lunastre Estate in the Grand Promenade for his meals.

When the third invasion of the Burning Legion began, Vanthir was one of the many nightborne horrified by Grand Magistrix Elisande's alliance with the demons. They were supportive of a an attempted coup by First Arcanist Thalyssra, though when this plot failed spoken dissent fell silent. Vanthir maintained links with the noblewoman Ly'leth Lunastre, who was also quietly opposed to the recent events.

Eventually, First Arcanist Thalyssra would found the Nightfallen resistance movement to wage war on Elisande and the Burning Legion in Suramar. The rebels were initially hopelessly outnumbered, however, and began by making contacts within Suramar City itself. Ly'leth would direct agents of Thalyssra to Vanthir, who she believed would be of great value to the fledgling rebellion. When he learned that Thalyssra still lived, Vanthir firmly committed himself to the Nightfallen cause.[2] 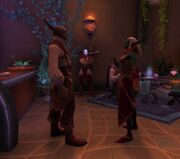 Under Vanthir, the Waning Crescent became a focal point for rebel activity within the city. Vanthir would also take it upon himself to distribute arcwine to the lower classes of nightborne, who had begun to suffer terrible withdraws from Elisande's contrived rationing of the substance. Vanthir oversaw the commandeering of large quantities of arcwine from the authorities, with his tavern becoming the main distribution center.[3] Vanthir was known to care deeply for the individuals he helped, and was willing to risk everything to make sure they survived.[4] Athough the amounts of arcwine stolen were often large, it would ultimately result in a small amount doled out to each person in need, so small that it was only enough for one day.[5] Those too weak to reach the tavern were given priority, with agents sent out to search for those in need.[6]

Vanthir would attend a major event in the Court of Stars being held by Grand Magistrix Elisande with the aim of reassuring her supporters in the wake of the unrest. Though Vanthir took no active part, rebel agents acting with Ly'leth Lunastre used the party as an opportunity to try to assassinate the Grand Magistrix. The attempt would fail, but Vanthir and the Nightfallen agents were not compromised.

Vanthir took an active role in directing resistance activity across the city, issuing orders to Nightfallen agents in missions ranging from prisoner rescue to assassinations. Along with his fellow rebel leaders, Vanthir's efforts meant that the rebellion continued to gain ground, and support, among the nightborne populace. Vanthir met and aided Ly'leth in her successful bid to become Elisande's Advisor in order to spy for the Nightfallen, with the Waning Crescent acting as the headquarters for her campaign.[7]

The successes of the Nightfallen eventually drove the Grand Magistrix to extreme measures. Aware of the base the rebels had in the Waning Crescent, Elisande dispatched a force of Duskwatch and demons to sack the entire district. The residents and the Nightfallen were caught completely off-guard, with large numbers slaughtered in the streets and much property destroyed. Vanthir himself was seized on Elisande's orders to be made an example of, and taken from the scene. Furious, First Arcanist Thalyssra and her allies became determined to locate and free Vanthir.[8]

The sign of the Dusk Lily above Vanthir's empty cage

With information from Ly'leth, and using her own magical talents, Thalyssra was able to determine where Vanthir was being held captive: the Terrace of Order. In order to serve as a lesson to other dissenters, he had been placed in a cage on the terrace and left to slowly wither from the lack of arcwine. By the time rebel agents arrived on the scene and defeated his captor in the form of Second Blade Thoramir, Vanthir was very close to being lost forever.[9]

His condition dire, Vanthir was quickly given a fruit from the arcan'dor tree which the Nightfallen had been cultivating, and which had the power to cure the magical addiction of the nightborne to the Nightwell. It proved to be just in time, and Vanthir was brought back from the brink. Before departing, Vanthir insisted that they place a Dusk Lily sigil above the now-empty cage, in order to serve as an example of their own to Suramar's people. The act would deeply rattle Elisande's supporters, and heralded a deadly new stage in the rebellion as a whole.[10]

After his near-death on the Terrace of Order, and with little remaining of his former tavern, Vanthir relocated to the main Nightfallen base in Shal'Aran. There, he would continue to work with rebel forces, now joined by allies from outside Suramar, in their final push to take the Nighthold and put an end to Elisande's regime.

I cannot begin to thank you enough for your part in rescuing me.

Without such an intervention I would be a mindless husk, forever tormented by the Nightwell. Now... I am free of it.

I have always believed that Thalyssra would lead us to salvation. Now I know for certain that the Nightborne can and will be saved.