Varedis Felsoul was a former Illidari demon hunter who used to run the training grounds for demon hunter initiates, teaching them about demons and overseeing training duels as master tutor inside the Ruins of Karabor in Shadowmoon Valley.[2] After his death, Varedis was revived by Kil'jaeden and convinced to join the Burning Legion. 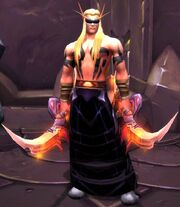 Varedis before his first death.

Varedis was one of five warriors sent to Illidan by Kael'thas to be trained as demon hunters - the first time that blood elves were allowed to do so. Illidan put the blood elves through excruciating trials that would have defeated most fully trained demon hunters. Three of the blood elves died during the training, and a fourth was driven to insanity. Varedis was the only one to succeed. Varedis turned out to be something of a prodigy; not only had he succeeded in his training, but he was displaying better command of his powers than many veteran demon hunters. Illidan saw the great potential in him and assigned three master demon hunters to train him further. Within a year, Varedis had surpassed them.[3]

Varedis's most fateful mission was a solo task. Illidan had heard reports that the remnants of the Shadow Council were active on Outland. Varedis was dispatched to scout for and steal any information he could find. Varedis snuck into a cave complex inhabited by Shadow Council acolytes without being noticed, and there he found the

[Book of Fel Names]. Inside was priceless information about the nature of demons, their weaknesses, and their habits. The tome contained within it tremendous power and it was impossible to remove due to Shadow Council enchantments. So Varedis absorbed as much of the book's essence as he could and left as quickly as he came. The Shadow Council had no idea he had ever been there. Illidan praised him for his achievement, and Varedis's pride swelled.[1] The Illidari demon hunters whispered that Varedis actually infiltrated the Council and stole the book[4] which is apparently not true. Varedis enjoyed his heightened power for years, becoming a stinging thorn in the Burning Legions' side. He could sense the movement of demons before he saw it happen and knew what they were thinking before they acted. But Varedis had not stolen the book's power, only become linked to it.

At one point, a felguard that the young demon hunters trained on broke free in the corridors of Karabor and Varedis put the demon down. Among his known students were Vandel and Ravael.[5] Varedis accompanied his master and the new demon hunters on a mission in Nathreza.[6]

When the Alliance and Horde came to Outland they stole the Book of Fel Names with the aid of the former Illidari Altruis the Sufferer, and this would prove to be Varedis's undoing. During the siege of the Black Temple, Varedis was one of many Illidari who stood in the heroes' way. But to his surprise, his foes destroyed the Book of Fel Names page by page, and Varedis was stunned to realize the book's destruction weakened him. His borrowed power quickly faded and he was slain.[1] His fellow demon hunter Kayn Sunfury mourns his passing, and holds Altruis responsible for his death.

After Varedis was killed, his demonic soul entered the Twisting Nether where he was found by Kil'jaeden. Kil'jaeden heaped endless torment upon Varedis, who resisted for a time, but it was not pain that broke his spirit. The Deceiver played upon his shock from the battle at the Black Temple. Champions had been prepared to face Varedis and known to use the Book of Fel Names, so who had told them of that power? Varedis knew it would not have been the Burning Legion or the Shadow Council, as they would have preferred the book to remain intact. Kil'jaeden convinced Varedis that it could only have been the Illidari, who knew of his power and betrayed him.[1]

With the help of other eredar, Kil'jaeden conducted a dangerous, agonizing ritual, infusing a small part of his soul into Varedis's spirit. When the ritual was complete, Varedis was not a demon hunter but a demon, loyal to the Burning Legion and hungry for vengeance. Varedis found that his weapons, now the Twinblades of the Deceiver, had also been changed. The ritual had imbued them with another slice of Kil'jaeden's astonishing power.[1]

In the years after Varedis's conversion, he became a terror to all who might oppose the Burning Legion. Worlds, cities, and innocents fell before him. He usually worked quietly and secretly, for the Legion did not want Azeroth to know his true potential. But he was allowed some satisfaction from time to time: hunting the Illidari who had escaped imprisonment by Maiev Shadowsong after Illidan's death. They had fled to the far corners of Azeroth and Outland, and Varedis had been dispatched to hunt them down one by one. It was a task he relished, for in his mind they had betrayed him.[1]

Varedis is one of the many demons summoned by Gul'dan in front of the Tomb of Sargeras to attack the forces of Azeroth in the climactic, disastrous battle at the Broken Shore.[7]

Varedis confronts the Illidari at Felsoul Hold in Suramar and is defeated in combat, but Kil'jaeden commands him to return to Argus before he is killed. The Twinblades of the Deceiver are taken from him by a demon hunter adventurer.[8] After the demon hunters re-recruit Akama, images of Varedis and Caria Felsoul appear on the Fel Hammer and they invite the demon hunters to join the Legion, though Varedis hopes they will refuse so he can kill them and get his glaives back.[9]

The Illidari discover that Caria and Varedis are on the Legion world of Niskara and invade it with the Fel Hammer. With Kil'jaeden himself watching in amusement, they are slain by the demon hunters. As he dies, Varedis begs Kil'jaeden to bring him back to life a second time.[10]