For information on the Well of Eternity encounter, see Mannoroth and Varo'then.

Varo'then was the leader of Queen Azshara's personal guard during the War of the Ancients.

Varo'then was the leader of Queen Azshara's personal guard[1] and bore a distinctive scar.[2] While hardly at the level of a Highborne sorcerer, he had his skills with the arts.[3] After the "death" of Xavius, Varo'then became the right hand of the queen. Outwardly, Varo'then was immune to Azshara's charms, but in fact he was madly in love with her. Unlike Xavius, Varo'then dealt with his obsession by serving the queen's every whim. Mannoroth found Varo'then annoying, but very efficient, meaning that the captain was the best-liked of the Highborne serving the Burning Legion. Varo'then and Illidan were sent to retrieve the Demon Soul from Deathwing. He succeeded and gave the Demon Soul to the pit lord Mannoroth (Varo'then nursed a vendetta against Malfurion for the remainder of the War of the Ancients). At the final battle overhead the Well of Eternity, Varo'then led the Highborne still loyal to the queen on the backs of large, mysterious, flying bat-like creatures. There, he was slain after admitting to Malfurion that he lived only to serve Azshara and gain power to lead her forces, even to destroy Kalimdor. As his confession had rejected Kalimdor, Kalimdor then rejected him.

In the Azshara zone on the eastern side of Kalimdor, there was a small area called Shadowsong Shrine. There were ghost mobs in this area with Varo'then's Ghost among them. 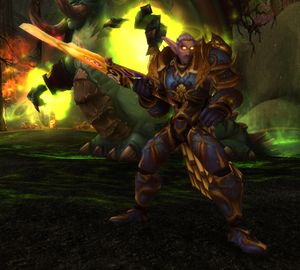 Varo'then in Well of Eternity.

Varo'then appears with Mannoroth as a boss encounter via the Caverns of Time in the Well of Eternity dungeon in patch 4.3.0. After he was killed, his sword was then used by adventurers from the future to defeat Mannoroth.