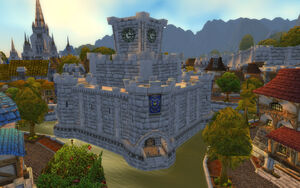 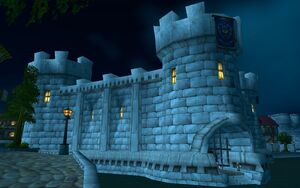 The Vault as seen from the canals.

The Vault[1] (or the Stormwind Vault)[citation needed]  is a prison within the human capital city of Stormwind. The Vault is located opposite the Stockade, and mirrors that other prison in most ways, except that the Vault is completely surrounded by water and has a clock on top of it. It is currently inaccessible, gated off by a portcullis with two guards.

Although there were guard NPCs there and the geography apparently matches the entrance to the Stockades, the Vault has never been officially accessible, not even in alpha or beta.

More dangerous types — demons, rogue mages and the like — are left to rot in the Vault. The Vault houses those who have no right to live but the Alliance does not have the means to kill easily — demons, ogre mages and other nightmares.[1]