Not to be confused with Vectis. 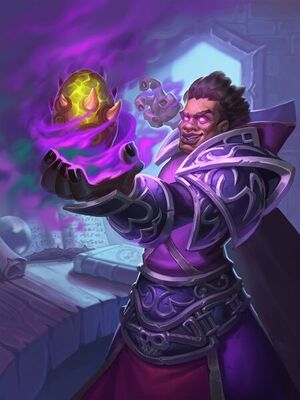 Vectus is a level 42 elite skeletal mage mini-boss and one of the main necromancy teachers of Scholomance, the School of Necromancy. Vectus developed the plagued dragonflight found inside Scholomance, which he got by paying Tinkee Steamboil in the Burning Steppes money for eggs out of Blackrock Spire.

[Dawn's Gambit] can transform Vectus' neutral students in the Viewing Room into hostile skeletons. This can be done safely from one of the room's corners or entrances. The skeletons are rather weak, so some fine AoE could take care of them. After taking care of all the students, you can pull and easily kill Marduk Blackpool alone before turning your attention to Vectus. Vectus has a fire aura that deals damage to players within melee range. If you don't have the Alexi's Gambit, you can still turn him hostile by attacking Marduk.

Vectus' living self appears as a neutral legendary minion in Hearthstone. He summons Plagued Hatchlings by infusing them with the Deathrattles of fallen minions, alluding to his methods of creating plagued dragons using necromancy. His flavor text reads: "Don’t let that dark magic worry you. He’ll ensure they hatch without a scratch."