For the original article, see Vehicles. 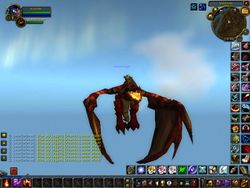 Vehicles like this proto-dragon are often used for assault.

The vehicle is a new addition to the World of Warcraft which has been introduced in its second expansion,

Wrath of the Lich King. This mechanic, while similar to the mounting mechanic, allows combat while on the vehicle, which often has its own spells or abilities unique to the vehicle.

[74] Escape from Silverbrook), as well as the initial death knight quests, while other vehicles were made for PvP in the battleground, Strand of the Ancients. Wintergrasp has also begun supplying vehicles which can be operated after gaining PvP ranks. Some vehicles can carry more than one person, who can sometimes attack from the passenger seats of certain vehicles or operate the turret in the case of a siege engine. Further confusing the issue, the Argent Tournament introduced mounts that are as much vehicles as the Wintergrasp ones.

Vehicles will usually have their own health bar and take their own damage (such as the Flame Leviathan fight in Ulduar), and the driver of a vehicle typically cannot be targeted and attacked when the vehicle is capable of taking damage (for example, the Oculus daily quest and any of the Sholazar Basin vehicle quests). Drivers are completely unaffected by movement impairing effects when using a vehicle,[citation needed]  though some effects can move the vehicle itself.[citation needed]  Some vehicles can fly,[1] while others are stationary and can merely rotate, such as the

Scarlet Cannon or the

vehicle out of range

To indicate that a character can board a vehicle, the pointer becomes a folded-over arrow. Clicking on the vehicle causes the character to jump and land on or astride the vehicle. This may bring up an interface unique to the vehicle, with a different frame including its own action bar (with fewer, larger buttons) and a dismount button. Dismounting a vehicle often causes the character to fly upwards and gain a temporary parachute buff to float safely to the ground.[citation needed]  Not all vehicles show these pointers,[3] as some are only activated through conversation with vehicle in NPC mode.[4]