For the character from the main universe, see Velen.

Velen is the ruler of Karabor and all draenei. As the ancient leader of the draenei, the prophet Velen has spent hundreds of human lifetimes carefully weighing and recording the futures he foresees so that creation itself does not fall. Velen’s guidance preserved his people during an exodus from their homeworld, Argus, but his wisdom is in question after the arrival of the Iron Horde on Draenor.[9]

Also known as the Ageless One, the venerable Velen has seen countless worlds unmade by the Burning Legion, and is one of the few who remember all of them.[1]

His origins lost to time, Velen was once a respected leader on his homeworld of Argus. Thousands of years ago, the Dark Titan, Sargeras, offered Velen's people immense power, but he wisely refused it. He foresaw that accepting that power would lead to tremendous suffering. However, other, less principled individuals agreed to the titan's bargain. Velen realized that he could not safely remain on Argus. Defying the Dark Titan himself, Velen and his brave followers escaped with help from the naaru, mysterious beings of the Holy Light. The daring wayfarers called themselves draenei, or "exiled ones." Sargeras's army of demons, the Burning Legion, hunted the draenei. Velen thwarted the demons for millennia, until at long last he led his people to a world inhabited by brutish orcs. There, they took sanctuary from their journey. They named this new world Draenor.[1]

Velen and his people dwelled on Draenor in relative peace and stability for hundreds of years. The prophet noticed the talent of Yrel, a devotee of the Light with a dark secret which Velen sensed. He foresaw that for good or ill, she had a larger role to play.[10]

Yet it was only a matter of time before the Burning Legion discovered them. When it did, the demons tried to incite the orcs against the draenei. But the orcs already had their own plans in motion. They rallied together to forge the Iron Horde and threatened draenei settlements all over Draenor. Now, the ancient Prophet faces yet another threat. For as long as he has gazed into the skies above Draenor, a dark power has lurked there. Velen had hoped never to confront it, but the orcs are prepared to unleash it. The Ageless One must protect his people, or else all will be consumed by darkness.[1] 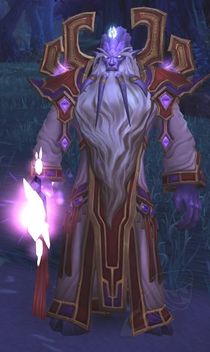 Velen first came in contact with the Alliance after the Assault on the Dark Portal, when they arrived on the shores of Shadowmoon Valley with several freed draenei slaves, including his student Yrel, and gave them the land Lunarfall. After helping the Alliance to settle in Lunarfall, Velen and Yrel left but soon after sent Yrel back to direct the Alliance through the valley. He left to deal with the Shadowmoon clan, led by Warlord Ner'zhul, who began using the power of the Void to attack the draenei. Velen arrived at Teluuna Observatory where Yrel's sister, Samaara also arrived only to be captured. Soon after Yrel and the adventurer cornered Ner'zhul who threatened to bring down a being known as the Dark Star. Even though the building was secured, the Warlord and the captured draenei teleported away. The Prophet thus decided to locate and free them and went to Twilight Glade where a camp was set up. He sent Yrel with a group of Rangari to Shaz'gul, home of the clan, to free the captives. He also asked the adventurers to gather some ingredients for a spell that would show him a possible future. Once he meditated, he received a vision. If Ner'zhul and the Iron Horde succeed in obtaining the Dark Star, then the draenei will lose Karabor and Velen himself will die in the defense. 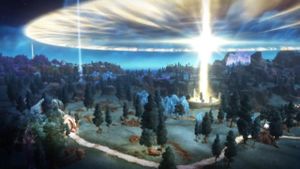 Eager to stop Ner'zhul, he contacted Rulkan, whom he befriended years ago, and now had abandoned her clan. The ex-mate agreed to help the Prophet and after showing the visions of Ner'zhul and Warchief Hellscream, she gave the Alliance a stone to enable entrance to Anguish Fortress. Once the adventurer deactivated its protecting barrier, the Prophet and Yrel entered its peak and watched Ner'zhul showing Grommash the power of the Dark Star by summoning a Void Lord. Once the enemy orcs left, the draenei destroyed the summoned creature and found Samaara on the brink of death. The draenei then left the area and returned to Embaari Village. Desperate to stop this event, Velen confronted Ner'zhul himself, battling the shaman while Yrel and the adventurer fought off creatures from the Void. Velen offered the fallen shaman the chance to turn from his dark path and let the draenei help him; Ner'zhul retorted that his soul had already been consumed by the shadows, but as the tide of the battle turned the prophet asserts there is no shadow the Light cannot breach.[11] In the end, when Ner'zhul succeeded in summoning the Dark Star, Velen gave his mark to Yrel and sacrificed himself to purify it and transform it into its original, true form: the naaru K'ara.

The naaru, Yrel and the Alliance then helped to save Karabor and stop the orc's invasion. After the battle, Yrel sent the adventurer back to Karabor where a monument for Velen was built. The student gave him

[The Prophet's Arcanum] and upon playing it at the monument, an image of Velen appeared and explained him the history of draenei and the naaru.

Some time later, the Exarchs gathered once more in Karabor in order to witness K'ara's blessing upon the Alliance commander. As the ceremony began, the spirit of Velen appeared, and the naaru spoke and blessed the adventurer through the Prophet.

During quests
There are many injured who need my aid. There is no time to waste.

A great leader sets an example for all those who follow.

They know when to speak, and when to listen.

They know when to stand and fight for their survival, and when to sacrifice it all for the greater good.

Are you ready to lead, <name>?

She is fierce in battle, but does not discipline herself through training.
She learns quickly, but cannot sit still enough to read a book.
She would much rather play with the village children than memorize the holy texts.
If only she would focus!

Greetings, savior of my people!
If you are hearing this message, it means that I am no more - but Karabor is safe.
I owe you an explanation.
The naaru that we draenei revere are creatures of pure light.
But if their death is near, they lose their essence, collapsing into creatures of shadow.
When we draenei first arrived on this world, naaru accompanied us. But they could not stop our vessel from crashing.
The "Dark Star" that appeared in the skies above Draenor that terrible night was no celestial body.
It was a fallen naaru, ejected from our vessel in moments of panic and terror. Its name was K'ara.
What was once a creature of faith and beauty became a dark and hungering God, a living font of darkness.
We owe K'ara a great debt. Without the naaru's aid, my people would never have escaped our homeworld of Argus.
To see K'ara's transformation into shadow was a heavy burden to bear. When the naaru returned to us... I did what I had to do.
Remember, life is the light, and light is life itself. They must be exchanged, but nothing is ever lost.
I only hope my people will understand.